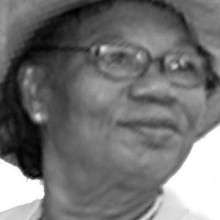 Thelma Rose Taper was born in Coldwater, Mississippi on February 1, 1930. She entered Heaven’s gates on February 9, 2018.

A consummate mother and homemaker, Thelma was an excellent cook and enjoyed preparing meals for her family and friends. Over the years she collected a large library of cookbooks from around the world. She also loved to watch food and cooking channels. She was also a sports fan and enjoyed attending and watching TV football.

Thelma had an unwavering faith in God. She was a member of South Parkway Church of God. Over the years, she had become very involved with the church and assisted with numerous fundraising events. She was also a talented musician and was a member of the church choir. She passed her musical talents on to her children.

Thelma was predeceased by her loving husband of 65 years, Walter J. Taper. She was also predeceased by her daughter Jane H. Reed and her two brothers, Bill N. Johnson and Herald D. Johnson. Pam is survived by her son Anthony Reed and his wife Julie, daughter Jane Smith and husband Andrew. She is also survived by five grandchildren, Marcia Smith, Betty Smith, Johnny Smith, Betty Reed, and Kelly Reed. She had two grandchildren, Simon Jones and Bobby Smith.

Her niece, Jane Walters lovingly cared for her the last 10 years of her life. Jane’s brother Bill Smith also provided assistance with her care in recent years. The family gives them and everyone else who cared for Pam their greatest gratitude.