Present with the Lord... 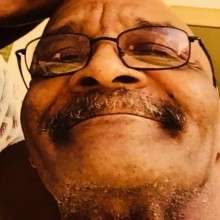 Present with the Lord...

Samuel States Jr. was born in Canton, MS to the late Samuel States Sr. and Inez Cox-Blair on December 27, 1957. He became a member of New Bethel Baptist Church of Canton, MS and remained a lifelong Christian. He learned to cook at an early age and he pursued the culinary arts and made his living as a caterer throughout his lifetime. Samuel States Jr. departed this life to be present with his Lord and savior on March 26, 2019. He is preceded in death by his father, mother, and two brothers; he leaves to cherish his memory three sisters Marie Blair, Debra Blair, and Melinda Blair all of Canton, MS; two daughters, Ronda (Willie) Grays, Jackson,MS, Melinda Blair, Chicago, IL; his grandchildren; Gabriel (Jamie) Jones, Sharon, MS, Arielle (Larry) Whipps, Madison, MS, Kawaii Jones and Johnny Jones, Jackson, MS and a whole host of great grandchildren, nieces, nephews, family, and friends.