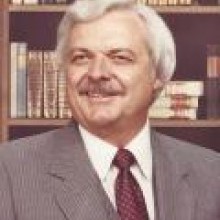 Lange W. "Wayne" Burney passed away on January 3, 2016. He was born on January 8, 1931, in Hereford, Texas, and he came from the stock of early Texas settlers, both on his mother's (Coneway) and father's side.

Wayne graduated from Galveston's Ball High School in 1948. His college days were interrupted by the Korean War and he served four years in the United States Air Force Security Service, mostly in Germany, before returning to school in 1955 under the veteran's "G.I. Bill" program.

He graduated from the University of Texas in 1957 with a degree in Business Administration and immediately began employment with the Ford Division of Ford Motor Company in Houston. There he served in various positions including Field Manager, Truck Merchandizing Manager and Business Management Manager. In 1964 he left that company to establish Frontier Ford Sales, Inc., in Humble, Texas. He was the president and general manager of that dealership until the business was sold in 1993 when he retired.

Wayne was very active in civic affairs. In the early 70s he served as a City of Humble councilman and, at the same time, was chairman of the board for the Humble Area Chamber of commerce. He served on the chamber's transportation committee for 33 years and was its long-time chairman. He was a 35 year member and served as chairman of the Aldine School District's Career and Technology Advisory Committee. He belonged to and held positions in many other service and trade associations.

Survivors include his wife, Marilyn Slaughter Burney; and a sister, Barbara Goodall of Breckenridge, Texas; a sister-in-law, June Glover of Humble; brother-in-law Jerry Slaughter of Humble, and many nieces, nephews, grandnieces and grandnephews.

A memorial service will be held Saturday January 9th, at 10 am, at Rosewood Cemetery with a reception to follow at the Humble Civic Center.

In lieu of flowers, the family requests that any donations be made to the .