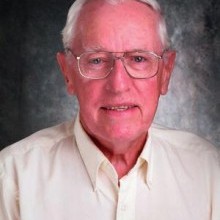 XENIA — William Joseph Brock, 88, died Thursday, September 26, 2014 at The Levine Dickson Hospice House in Huntersville, North Carolina. He battled Parkinson's disease and Myasthenia Gravis for the past 5 1/2 years. A Mass of Christian Burial will be held at St. Mark's Catholic Church on Stumptown Road on Tuesday, September 29, 2014 at 11:00 a.m. The family will receive visitors prior to the Mass in the foyer of St. Mark's Church beginning at 10:15 am. William was born on August 13, 1926 in Fayette, Ohio to Josie Devereaux and Joseph Brock, Jr. William graduated from London High School in 1938 and worked with his father on the farm until enlisting in the U.S. Army in August, 1944. He worked at Scott Field Air Base in Illinois until honorable discharge in 1948. William was united in marriage to Martha Ann Cummins of London, Ohio on August 18, 1951. Bill and Martha were married for 59 wonderful years, before Martha's passing in March, 2009. They enjoyed vacationing and subsequently wintering in Daytona Beach and Flagler Beach Florida at Bulow Resort for 15 years. The sunny weather, boating, touring Florida and visiting friends and relatives were favorites for them. Bill worked for the London Farm Bureau for five years until moving to Kenton, Ohio in 1956. In Kenton, Ohio, Bill continued his career with the Farm Bureau and in 1964 started his career with Sears, Roebuck and Co. Mr. Brock, as he was known by his Sear's employees, was Manager of the catalog store in Upper Sandusky, Ohio for 3 years before being transferred to Xenia, Ohio to manage the Sear's store in a town that was ravaged by one of the largest tornado's on record in 1974. Mr. Brock was hospitalized and lost all of his personal belongings in the storm, but his family of seven children and his wife were safe. As a result of the storm, the Xenia store was closed and Mr. Brock was made Manager of the Dayton Mall and Dayton downtown Sear's stores-catalog division. After a career that spanned 27 years, Bill retired from Sear's in 1991 to begin his retirement and vacationing in Florida. He was preceded in death by his wife, Martha in March, 2009, and son, Robert William Brock in December, 2011. After Martha's death in 2009, Bill moved to Charlotte, NC, where he resided with his oldest daughter, Teresa Brock Berkey and her husband, Richard Berkey, until his death. Additional children survivors include: daughter, Margaret (Peg) Ayers of Morgantown, West Virginia, and sons John Joseph (Xenia, Ohio); Paul Vincent (Fontana, California); James Thomas (Germantown, Ohio); William Joseph (Dayton, Ohio). Eleven grandchildren and two great grandchildren also survive him. Burial will take place at the convenience of the family at St. Patrick's Cemetery in London, Ohio. Memorial donations may be made to the Cornelius Animal Shelter, Cornelius, NC, or the Levine Dickson Hospice House in Mr. Brock's name. Raymer-Kepner Funeral Home is assisting the family. Friends may offer condolences to the family at http://www.raymerfh.com/.