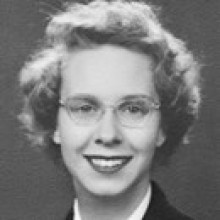 VIRGINIA H. MERRELLVirginia Hammitt Merrell ("Ginny" to all her friends) died peacefully in Naples, FL on Saturday, July 29, 2017. She was ninety-three years old, and is survived by son Samuel J. Merrell (New York, NY), daughter-in-law Susan E. Aronoff, granddaughter Lile Merrell, and sister-in-law Lynn Stuart Merrell (Vero Beach, FL). Ginny was predeceased by her beloved husband Thurston (Bud) Merrell, Jr., sister Jaqueline (Jackie) Dewees, and son Thurston (Tony) Merrell III. Virginia Adams Hammitt was born on August 24, 1923, in Kobe, Japan to Samuel Jackson and Marion Hallock Hammitt. As a toddler, Ginny's family moved to Vancouver, B.C., where she attended York House School and graduated from the University of British Columbia in 1944 as a member of Delta Gamma and editor of the UBC student newspaper. After graduation, Ginny volunteered as an Officer Candidate for the US Navy Waves, served as a PBY Flight Trainer, and met Ensign Bud Merrell at the Jacksonville Naval Air Station early in 1945. Mustered out shortly after their November 7, 1945 wedding, Ginny and Bud moved to Cincinnati, Ohio, and raised their two sons. Ginny was active in the Cincinnati Junior League, the League of Women Voters, and also volunteered at The Children's Theater, Cincinnati Summer Opera, and at the Church of the Advent as a member of the Altar Guild and alto in the choir. At the time of her passing, Ginny had lived in Naples for thirty years, and volunteered at the Conservancy of Southwest FL, at Trinity By The Cove Episcopal Church, and at the Naples League Club. She swam, played occasional tennis and was an avid reader. A memorial for family and close friends will be held at 11am on August 24, 2017 at Bower Chapel, Moorings Park, in Naples FL. In lieu of flowers the family requests that memorials be sent to the Conservancy of Southwest FL, 1450 Merrihue Drive, Naples FL 34102, or to the Moorings Park Foundation Inc., 120 Moorings Park Drive, Naples FL 34105.