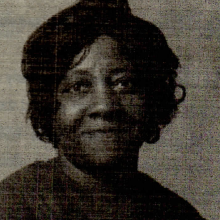 Mrs. Sarah Jones  Rowland of 475 Maynard Terrance- Atlanta, Georgia went home to be with our Heavenly father On July 18,2017

Mrs. Rowland was born on September 9,1909 to Lawrence and Ella Florence Culberson in Meriwether County, Georgia. She was one of seventeen children, in which all are deceased with the exception  of her sister Mrs. Lenora Santiago.

She was educated  in Troup County, Georgia and worked on the farm along with her family.