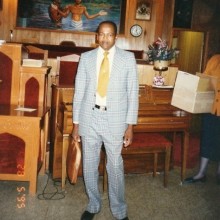 "I have fought a good fight, I have finished my course.  I have kept the faith; henceforth there is laid up for me a crown of righteousness which the Lord, the righteous judge shall give me that day."  - 2 Timothy 4: 7-8

Robert James Thomas, Jr. was born on August 28, 1934, in Ethel, Louisiana, to the union of the late Rev. Robert James Thomas, Sr. and Mattie Jewel Bell.  He was their fourth child and the first son born to this union.  When "Junior" was 4 years of age his father passed away on March 26, 1939.  Thereafter, he was raised by his mother Mattie along with his 7 other siblings in a devout Christian home environment.

At a very young age, "Junior" was saved at the St. Paul Church of God in Christ under the pastorship of the late Elder James Stampley. Later on in life, he became a member of St. Peter United Methodist Church.  He loved his church very much as it was the original church of his father and most of his Thomas family relatives.  He regularly attended St. Peter United Methodist Church until his health began to fail him.

Robert was educated in the East Feliciana Parish school system and graduated from Clinton Industrial High School around 1952.  He had several different employments in his life but primarily worked as a truck driver for furniture moving companies.

He was nicknamed "Deena" by his younger brother, Joe Louis Thomas, when Joe was a little boy and could not pronounce the nickname  "Junior". Thereafter, nearly everyone began to call him "Deena" although some would alternate and also call him "Junior".   In the last few years of his life, Deena regularly called his sisters Mary Ella Boatner and Idella White, who both live in San Diego, CA, to keep in touch with them and to see how they were getting along.  He was also close to his remaining brothers, Joe Louis, Emanuel, and Samuel, who still resided near him in Louisiana.  They all loved their brother, Deena, and did whatever was needed to assist him after his health began to decline.

He was also close to his dear friend and neighbor, Solomon Washington, who also assisted him up until the time he began to live in the Zachary Manor Nursing Home in Zachary, LA, where he passed away on May 16, 2017.