Dont cry because its over. Smile because it happened. 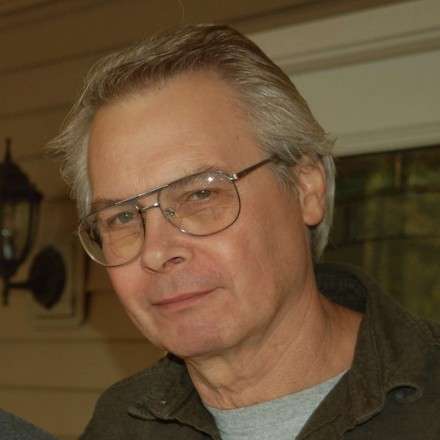 Dont cry because its over. Smile because it happened.

My name is Sue and I loved being Dick's wife and partner because he respected me and treated me like I was his princess. (I may have given him that impression). And to me, he was wise and practical, generous, kind and loving. Now Dick is at rest and I hold him close within me. Please hold him close, as I do, in your mind and spirit.

This was a man that could turn anything into a pun, or maybe he just did it to see if someone else was wired like him. "People are weird. When we find someone with weirdness that is compatible with ours, we team up and call it love." I have met his friends and listened to his stories, it was definitely love.

He seemed to chase the obscure, some say 'think out of the box', until he could create a masterpiece of functionality. I suppose that was the Toolmaker in him. Always creating, growing, making, improving on just about everything he touched. And the simplest jobs required the most complex jigs to replicate the process, if it should ever be necessary.

Sawdust was his constant companion and muddy soil ran a close second. I have to believe it was in his genes (jeans?) because his father, Scotty Willett, who passed in 1998, was a sawdust and dirt kind of man. Both were unpretentious and straightforward, sometimes a little too much, and very private people.

As the eldest of eight siblings, he learned to garden, so it was normal to see him on his hands and knees pulling the smallest weeds from around the beans and building mounds around the cornstalks and trellises for the squash and cucumbers.

And from his harvest, we learned to preserve everything he grew. In the beginning he asked his mother Lucille, who passed in 2014, how to process the tomatoes and from that point, there was no stopping him. Canning gallons and gallons of rich tomato sauce was his pride, not that he didn't enjoy all of the canning and freezing. He designed an outdoor kitchen so we wouldn't have the heat and mess in the house and bought another freezer for the bounty he shared. See? 'Out of the box'!

His love of flowers rivaled the vegetable garden. The rich aroma of lilies and peonies was soothing to him, so of course it required a secret 60' circular garden with 10' high hedges and separate sections (requiring jigs, naturally) to make it amazing even from outer space. It's not so secret when it's that big, honey.

Every summer he would take flowers to the cemetery where his son Scott, who passed in 1990, is memorialized and cursed the deer for eating the lilies. But he maintained it lovingly by pruning the tree, pulling the weeds and planting more lilies.

He could not have been more proud of his daughter, Erica and her wonderful choice for a husband, Chuck Humphrey and the two grandchildren they gave him, Evan and Madison. He was secure knowing how successful and industrious they are and that they could survive whatever life tossed their way. He admired their partnership and the strength of their character.

When we married he told me the greatest gift I ever gave him, was to become the uncle-stepdad to my sons, Joe (Karen Caruso) Willett, Danny Willett and Keith (Liz) Willett.  He adored their sense of humor and the porch parties that were filled with laughter and teasing. He always said his best friends were Jack and Bud. “When he worked, he really worked. But when he played, he really PLAYED.” Again with the Dr. Seuss, are you seeing a pattern here?

Dick's former brother-in-law, Frank Hosmer and his wife Fay, were always supportive and ever present for family gatherings. Frank would share stories from their past and Fay would laugh and nod right along. They had a bond clearly stronger than blood.

The last thing Dick made for me, necessary during this toilet paper crisis, was a holder for rolls that were too tight to fit on a regular toilet paper holder. And he made it out of mahogany because that 'was fit for the throne'. See? Again.

Everyone who remembers him is asked to celebrate Dick's life in their own way, raising a glass of their favorite drink in his memory would be quite appropriate. And to his family, a drinking game - 'Estate Sale' clink-clink Woo!

"Sometimes you will never know the value of a moment, until it becomes a memory."

(Please click on the Photos tab on the left to see Dick's life in pictures.)