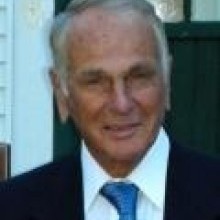 Richard J. (Dick) Frost, 92, of Kingwood, Texas passed away on Saturday, May 16, 2015 at home with his family around him. He was born on November 7, 1922, in Brookline, Massachusetts, the second son of parents Harold Maurice and Lucy Church Frost. He grew up in Newton, MA and loved sports and the out of doors. Dick joined the U.S. Army 4th Calvary during World War II and was in combat in Europe from the Battle of the Bulge to the Harz Mountains. After 3 1/2 years of serving his country, he graduated from the University of Massachusetts in Geology and later earned a Master's degree in Geology from Brown University. Dick was called to serve his country again for 18 months during the Korean War, where he was part of the 73rd Combat Engineers.

Dick met the love of his life, Ethel Wilson, on a blind date while he was at Fort Riley, Kansas, before shipping overseas. They married in Topeka, Kansas on August 19, 1946 after Dick returned from the war. They remained married for 65 years, until Ethel's death in 2011. Ethel was with him in heart and spirit until he died, and he never got used to being without her.

Dick went to work for Shell Oil Company on December 16th, 1949, the day his daughter was born. For the next 28 years he explored for oil and gas in the Rocky Mountains, mid-continent Appalachians, offshore Atlantic, and offshore Louisiana. One of the biggest thrills of his career was when Shell drilled a wildcat well on a prospect he mapped he mapped in offshore Louisiana. The well logged 100 net feet of oil - a 10 million barrel accumulation produced from a single water bottom completion. Following his career with Shell, Dick worked as an independent oil and gas consulting geologist in Houston, TX.

Dick loved to hunt and fish - trout in Colorado, redfish in Louisiana, and deer and flounder in Texas. After retirement, he and Ethel spent the summer months at their home on the shore in Friendship, Maine, where Dick fished for stripers, dug clams, and played tennis and croquet (he played killer croquet). He went salmon fishing with his daughter and son-in-law in Alaska, boogie boarding (still at 90!) and snorkeling in Hawai'i, and deer hunting and bass fishing with his son in Alabama and Texas.

Dick was preceded in death by his wife Ethel, his parents, and his brother Harold M Frost. He is survived by his daughter Kathryn Frost and husband Lloyd Lowry of Kailua Kona, HI; son Richard W. Frost and wife Lois of Brentwood, TN; grandchildren Chelsea Summer Frost of Greenville, SC and Chad Richard Frost of Franklin, TN.

Memorial donations may be made to the Friendship Methodist Church, Box 189, Friendship, ME 04547in memory of Dick and Ethel Frost.