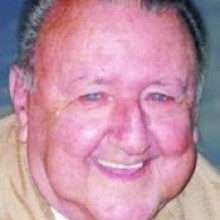 He was born on March 4, 1937 to Joseph B. and Leona (Boucher) Deschambeault in Biddeford. He graduated from St. Louis High School, Class of 1954.

He entered the United States Air Force on July 21, 1955 and retired as a Technical Sergeant on July 31, 1972. He went on to work at the Portsmouth Naval Shipyard in the electrical shop before retiring from there and moving on to Maine Medical Center in Portland.

He was a member of the American Legion, NCOA, and the Veteran's Association. He enjoyed playing cards and golf, and loved listening to the BeeGees. His favorite thing was the time that he spent with his family and grandchildren.

Visiting Hours will be 9 to 10:30 a.m. on Thursday, May 18, 2017 at Hope Memorial Chapel 480 Elm St., Biddeford, ME 04005. A Funeral Service will be celebrated immediately following at the funeral home. Burial will be in St. Joseph Cemetery in Biddeford.