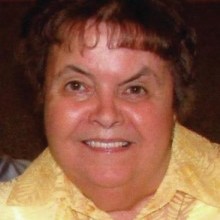 COLUMBIA — Pamela Jean Ramey, 70, of Sedalia passed away Thursday, November 3, 2016 at University of Missouri Hospital in Columbia, Missouri. She was born on August 12, 1946 in Sedalia, Missouri the daughter of Freeman Earnest and Dora Dee (McBain) Paxton, who preceded her in death.

On September 11, 1964 she was united in marriage to James Larry Ramey, who resides of the home.

Pam was a member of Hopewell Baptist Church. She enjoyed the beauty of flowers. She especially loved spending time with her kids, grandkids and great grandkids. Pam's loved the holiday seasons, especially Christmas time with the family. She lived all of her life in the Sedalia area.

Besides her husband Larry, she is also survived by a son, Philip Ramey and his wife Julie; a daughter, Kristi Houston and her husband Tracy; A twin sister Janice Tucker and her husband Wayne; two brothers, Dennis Paxton and Donnie Paxton; four grandchildren, Megan, Nicholas, Kyle, and Brittany; and five great grandchildren, Ella, Beckett, Haddie, Easton, and Ava all of Sedalia.

Besides her parents, she was also preceded in death by an infant son, Daniel Ramey.

A funeral services will be held at 11:00 a.m. Tuesday November 8, 2016 at Rea Funeral Chapel with Rev. David Owens officiating.

The family will receive friends one hour prior to the service at the chapel.

Burial will be at Hopewell Cemetery.

Memorial contributions may be made to Hopewell Baptist Church in care of Rea Funeral Chapel.