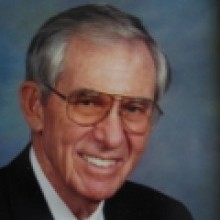 Orval John Shirley, OJ, was born on May 17, 1924 in Hugoton, Kansas to Edith Greenwood Shirley and Orval John Shirley. OJ died on July 12, 2013 at the age of 89. He was laid to rest on July 16, 2013. He was the oldest of seven children. During High School he worked as a soda jerk at Porter's where he earned the name"Speed". OJ graduated from Hugoton High School in 1942. Following high school he joined The Army Air Force and was a navigator on a B-17 during WW II. He was in the 553rd AAFBU. Among other metals he earned the Air Metal OLC Gold. Just Prior to his deployment OJ Married Maurine Youngren also of Hugoton on October 4, 1944. After the war, The GI bill and Maurine put OJ through school. He graduated from The University of Oklahoma in 1948 with a petroleum engineering degree. OJ went to work for Shell Oil and moved to Midland, Texas where his first daughter Mary Karen was Born. OJ's job took him to many locations in Texas. In San Antonio his second daughter Barbara Jill was born. He lived for 25 years in New Orleans where his son, John Steven was Born. OJ held various positions during his 40-year career with Shell. When he retired in 1989, he was Shell's Environmental Specialist. OJ loved gardening, golfing, reading, traveling and photography. His wife of 53 years, Maurine died in 1997. OJ married Gay Buffington in 1999 with whom he loved to travel. He is missed by Gay Shirley, his wife of 14 years. He is also survived by his brothers, Bobby Shirley of Tulsa, Oklahoma, Lee Shirley of Olive Branch Mississippi, his sister Patsy Butel of Paola Kansas, also his three children; Karen Crum, Jill Shirley, and Steve Shirley, as well as two grandchildren; Will F. Broach III and Alison Broach. His wife Maurine Y. Shirley, brother Ross Shirley, sisters Joanne Drew and Doris Shirley preceded him in death. OJ loved to tell stories about growing up in Hugoton during the dust bowl days. Diane, George and Crystal of Estia Care loved and cared for OJ during his last months. They know these stories by heart as well as his cherry pie stories. We miss our husband, dad, pops, brother and friend.