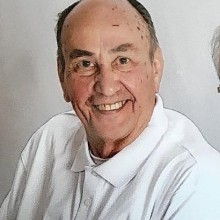 Bill was a manager at General Dynamics and retired in 1992. He had also worked at St. Rita's Medical Center in patient transport and retired in 2013. He proudly served his country as a member of the United States Navy. He enjoyed camping and woodworking. He had a travel trailer and traveled all over. He enjoyed square dancing with the Hicks and Chicks Club. He was a member of the Lima Eagles Aerie 370, the American Legion Post 96 and was an active Mason (Florida chapter) up until his death.

The family will receive friends on Sunday, November 6, 2016 from 1:00 PM to 6:00 PM at CHILES-LAMAN FUNERAL & CREMATION SERVICES, SHAWNEE CHAPEL.

Graveside services will be held at George Washington Memorial Park Cemetery, Paramus, New Jersey at a later date at the convenience of the family.

In lieu of flowers memorial contributions may be made to the .

Condolences may be expressed at www.chiles-lamanfh.com.