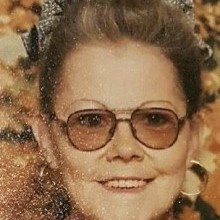 Jean was a waitress from 1970 to 1997 working at the White Coffee Pot in Baltimore, Maryland. Jean attended the Alleghany Wesleyan Methodist Church of Oblong, Illinois, and also attended Oblong Schools. Jean enjoyed bowling and playing golf with her husband. Jean's family and her dogs meant everything to her.

Jean was preceded in death by her parents, husband; two brothers and sister-in-law, Richard and Edith Shea and Frank Shea; one sister and brother-in-law, Imogene and Junior Sloan; and two brothers-in-law, Basil Vail and William "Bill" Scheidegger.

Visitation will be from 1 p.m., until Sunday Celebration of Jean's life services at 2:30 p.m. on Nov. 20, 2016, at Pulliam Funeral Home in Oblong, Illinois. Burial will follow in the White Oak Cemetery rural Oblong.

The family request that an expression of sympathy may take the form of contributions to the Crawford County Humane Society or Richland Memorial Hospital Hospice with envelopes at or may be mailed to Pulliam Funeral Home P.O. Box 121 Oblong, IL 62449.

Condolences and or memories may be sent to the family at www.oblongfuneralhome.com.