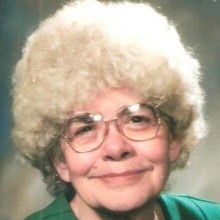 Celebration of life funeral services for Loyce Jean Hawkins, age 83 formerly of Frederick are scheduled for 11 a.m., Feb. 4, 2016, at the Burkhardt Chapel of the Frederick Memorial Cemetery with Doug Hawkins, brother, officiating. Ms. Hawkins passed away Sunday, Jan. 29, 2017, at an Oklahoma City, rehab, nursing care center. Burial is scheduled in the Frederick Memorial Cemetery under the direction of Orr Gray Gish Funeral Home.

Loyce Jean Hawkins was born on the Hawkins Family farm nine miles northeast of Frederick on Dec. 18, 1933, the first daughter of Hattie Lucille (Norrell) and Jessie Raymond Hawkins. She started school at the one-room Fairview school which was one mile north of the Hawkins homestead. After she finished second grade, Fairview was consolidated into Frederick Public Schools, and she graduated from Frederick High School in 1954.

She worked for many years on the farm – chopping cotton, pulling cotton, and doing other farm chores with the family. Loyce and her family moved from the farm to Frederick in 1969 where she lived until 1986 when she moved to Oklahoma City. After a few years, she moved to Guthrie where she lived and worked for New Horizons for almost 20 years. While there, she enjoyed spending time with her friends and being involved in activities.

They attended church, went to ballgames, movies, shopping, out to eat, and swimming. She especially enjoyed fun times with her friends at celebrations, parties and summer vacations. Loyce was devoted to her family and gave them unconditional love. She was the family's encyclopedia for dates of birth, names and ancestry information. She loved spending time with her family, especially at Christmas and Thanksgiving.

Some of her favorite things were Pepsi, Sonic hot dogs, strawberry ice cream, burritos, watching soap operas, reading, working with numbers, writing letters to her family, shopping for pretty clothes, and getting her nails and hair done. Loyce loved all her nieces and nephews and was so proud of them. She also loved her Norrell and Hawkins cousins.

Her life influenced her family to strive to be their best. She taught them invaluable lessons of compassion and love. Her influence led several family members to dedicate their lives to social work. She has been a precious gift from God.

Loyce was lovingly cared for by her family, the staff at Quail Creek Nursing Facility in Oklahoma City, and Physician's Choice Hospice over the last several years. Loyce will be greatly missed by her brothers and sisters and their families: Neva Peterson, Wanda North, Dale Hawkins, Gayle Hultquist, and Doug Hawkins.

She was preceded in death by her parents; brother, Kenneth; sister, Frances Sue; and brother-in-law, Bob North.