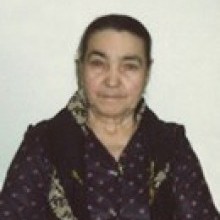 October 3, 2016  January 18, 2017Mrs. Kata Jurcic, age 100 years, passed away peacefully on Wednesday, January 18, 2017 at the Thunder Bay Regional Health Sciences Centre, with family by her side.Kata was born on October 3, 1916 in Donje Pazariste, Lika Gospic, Croatia. In 1977, she immigrated to Canada with her daughter Ana to join her son Joso and daughter-in-law Ivka in Thunder Bay. Her son Ivan immigrated to Canada in 1979, to join the family.Kata enjoyed gardening, crocheting, cooking and visiting with family and friends. She always made sure that her guest were well fed. Baba, as they called her, enjoyed playing with her grandchildren and great grandchildren and telling them many stories about her life in Croatia. She will be remembered for her giving nature and her kind heart. She will be greatly missed by all of her family and friends.Kata is survived by her children Joso (Ivka) Jurcic, Ivan (Margaret) Jurcic, and Ana Fric, of Thunder Bay. Her 8 grandchildren Marija, Kathy (Roman), Frank, Matt (Jenni), Ivan Erin), Mark (Chamberlain), Robert (Elizabeth) and Diane and her 8 great grandchildren Tamara, Stefanie, Mathew, Ivana, Michael, Lucas, Jacy and Joseph. She is also survived by her sister Marija Stavlic and her family, as well as numerous nieces, nephews and other relatives in Canada, Australia and Croatia.She was predeceased by her husband Mate, her parents Karlo and Marija Krpan, daughter Tera, granddaughter Marina, sisters Anka and Masha, her brother Joso, brother-in-law Luka Stavlic and her son-in-laws Ivan Pezelj and Nick Fric.Funeral Services will be held at 11:00 a.m. on Monday, January 23, 2017 in the Chapel of Harbourview Funeral Centre, 499 North Cumberland Street, presided by Rev. Msgr. P.M. Stilla, V.G. Interment will follow in St. Andrew's Catholic Cemetery. Visitation for family and friends will be held on Sunday afternoon from 12:30 p.m. until 2:30 p.m. at Harbourview where the Prayer Service will begin at 1:30 p.m. In lieu of flowers, donations may be made to a charity of your choice.

On-line condolences may be offered at www.harbourviewfuneral.ca