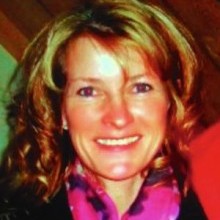 XENIA — Julia Ann Crawford McNamee of Xenia, OH, died peacefully surrounded by family on April 12, 2014, following a lengthy illness. Julie was born on January 5, 1963, to Robert and Loraine Compton Crawford. She graduated from Xenia High School in 1981 and attended Bethel College in Indiana. She spent 30 years in the greater South Bend, IN, area and returned to her hometown in August 2013. Julie was an active and loyal volunteer in her church and local community. She was a member of St. Pius X Catholic Church in Granger, IN, and participated in the Elizabeth Ministry and RCIA. She also worked closely with River Valley Community Church, Clay United Methodist Church, Hospice and her children's school communities. Julie is survived by her children Abigail, Hillary, Patrick and Garrett; her mother, Loraine; her twin sister, Judie Crawford Spitz; her brother and sister-in-law Jim & Cyndi Crawford; her sister and brother-in-law Jane & Kirk Henning; and her brother Steve Crawford. She also leaves several nieces and nephews including Matt & Kara Spitz and their daughter Elsie, Jessica Spitz, Andy Spitz, Anna Spitz, Becky & Dan Cannon and their children Addison and Emma, Greg & Syrae Crawford and their children Mykah and Mhkya, Katelyn Henning and Kristin Henning. Julie leaves three aunts, Shirley Compton Dill, Nancy Compton and Marjorie Crawford, several cousins and their families, and her faithful four-legged companions, Rusty and Bentley. She was preceded in death by her father in 2008. A Funeral Mass will be held on Wednesday, April 16 at St. Pius X Catholic Church in Granger, IN. A visitation will begin at 9:30 AM followed by a Mass at 11 AM. A celebration of life will be held on Saturday, April 19 at 11 AM at Friends Church in Xenia, OH. A visitation with the family will begin at 9 am. In lieu of flowers, donations may be sent to Hospice of Dayton or to St. Pius X Catholic Church. The family would like to thank those numerous individuals who have offered continued care and support including her South Bend circle of friends, the McNamee family, Hospice of Dayton and Janie Cassidy. "We have this hope as an anchor for the soul, firm and secure." Hebrews 6:19. Online condolences may be made to the family at www.mccolaughfuneralhome.com.