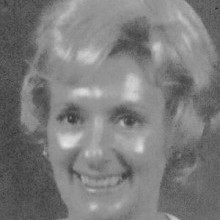 XENIA — Johnena Jean Herdman was born on May 11, 1928 in Dayton, Ohio. Her mother, Carolyn Isabelle Bond Heitzman, gave her the unique first name Johnena, which would be shortened in her youth to "Johnnie" and would remain a lifelong nickname for her closest friends and family. And although birth dates do not often have meaning in themselves, for Johnena this was not to be so. May 11th fit her perfectly, as it always occurred along with the blooming of spring flowers, one of her lifetime joys, and her birthday often fell on Mother's Day, which celebrated the truest of her many callings. Johnena grew up in Tipp City, Ohio with her mother and father, Raymond Heitzman, both of whom preceded her in death, sister Carolyn Rae Blank (currently of Winchester, KY) and brother Ronald Charles Heitzman, who also preceded her in death. She graduated from Tippecanoe High School in 1946 and played basketball at a time when the rules did not allow girls to dribble the ball. Johnena was also the captain of the basketball cheerleading squad. In 1943, she met the love of her life, Darrel Eugene Herdman at a square dance. They were married on September 14, 1946 after Darrel returned from fighting in the Pacific theater during World War Two. One of the gifts that he brought with him from Japan was a roll of silk he hoped to turn into a wedding dress for Johnena. In 1947 Johnena and Darrel welcomed their first son, John Eugene and a year later, they added Darrel Fred. While John and Fred were still little boys, the family moved from a small farm in southwest Ohio, where Johnena had a memorable and oft-told encounter with snakes in the farm's outhouse, into the town of Xenia. The next two decades were among the most wonderful of Johnena's life, as the family spent few hours away from each other. The highlight of each week was attending one of John or Fred's many baseball, basketball, and football games in Xenia. Johnena worked for the Xenia Community Schools and the family attended Faith Community United Methodist Church. In 1975, Johnena became a grandmother for the first time. Each of her six grandchildren would say that Johnena was born to be "Grandma." Over time, she would tend to six grandchildren, Justin Edward (Elizabeth Hijar) Herdman, Karah Suzanne (John Mark) Parschauer, Jonathan Eugene Herdman, Darrel Fred Herdman, Jr., Katherine Pope (Jay) Scherer, and Christopher Jackson Margrett. Picking right up where she left off with her sons, Johnena spent as much time as possible with her grandchildren – at the pool, watching late-night television in bed, and tending to them when they had to stay home sick from school. Eventually, Johnena added the name "Granny" as she became a great-grandmother to six great-grandchildren (Lucy, Julian, John Justin, Grace, Beatrice, and Jackson). In retirement, Johnena and Darrel moved to Coral Springs, Florida and lived there together for twenty years. Johnena lost her best friend and partner when Darrel passed away in 2005. In her last years, Johnena moved to Chagrin Falls, Ohio in order to live with her son Fred and daughter-in-law Patty. On January 9, 2015, Johnena passed away peacefully at Monte Ahuja University Hospital. She is certainly with Darrel now – a reunion that she had long hoped for and much deserves. The world can only be a sadder place now that there is one less grandma amongst us, but it has forever been made better through the life of our one – and only – Johnena. A celebration of her life will be held at 10 a.m. on Saturday, January 17 at Neeld Funeral Home, 1276 N. Detroit Street, Xenia, Ohio. Internment will be in Valley View Memorial Gardens in Xenia. Visitation will be held from 6-8 p.m. on Friday, January 16 at Neeld Funeral Home. In lieu of flowers, contributions may be made to the Darrel Eugene and Johnena Jean Herdman scholarship fund to be established for a deserving member of the Xenia High School graduating class. Condolences for the family may be made at www.NeeldFuneralHome.com.