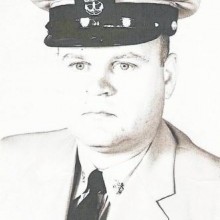 John joined the Navy when he graduated from high school at the age of 17 and served in the Navy for 22 years in service as a naval engineer. After his retirement from the Navy, he joined Massey Ferguson as an instructor and taught engineer classes all over the U.S.A. for the next 11 years. He then retired at the age of 52 and moved to Hamlet.

He was a lifetime member of the American Legion, served as adjutant and on the board and in many other capacities such as selling tickets to benefit the ball teams and cooking for the many dinners and breakfasts that were done in order to help the disabled veterans. He was also a member of the Veterans of Foreign Wars.

He attended the Second Baptist Church and the First Pentecostal Holiness Church of Hamlet with the Rev. Al McCormick.

John had two hobbies: trains were his No. 1 hobby; he set up an HO scale railroad in one of the bedrooms and spent many hours there. His next hobby was traveling; covering the U.S.A., then going to Europe three times, China for 21 days, Australia, New Zealand, Egypt and Israel, Canada, Alaska, South America two times, the Panama Canal, the Bahamas two times, Thailand and Singapore, in addition to many cruises.

He was preceded in death by his father, John Peter Schmit; and mother, Alice Farmer Schmit; and his late first wife, Emma Ollie Schmit.

He is survived by his wife of 32 years, Virginia "Jenny" English Paul Schmit of the home; and eight stepdaughters, Sherry and husband Joe Rushing of Gibson, Angela Kay Paul of Ghio, Lisa Paul and husband Glenn of Hamlet, Joanne and husband Lacy Shepherd of Rockingham, Donna and husband Rick Powell of Michigan, Sandy and husband Gary Brown of Missouri, Joyce Bain of New Jersey and Carol Iverson of Ohio. Although he was a stepfather in name, he was a real dad to each and was always there if he was needed.

John has left many friends from the churches, his blessed family and a very special friend for more than 25 years, his doctor but close friend Dr. Fred McQueen of Hamlet and Barbara Gayle Williams.

His funeral service will be held at 2 p.m. on Tuesday at Watson King Funeral Home in Hamlet. Officiating will be the Rev. Michael Carpenter and the Rev. Chris Martin. Speaking will be Willard Page of the American Legion. Burial will follow at Richmond Memorial Cemetery with full military honors.

All memorials are to be made to the 1st Pentecostal Holiness Church of Hamlet.

Watson-King Funeral Home in Hamlet is serving the Schmit family.

Online condolences may be made at www.watson-kingfuneralhome.com.