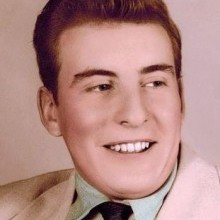 John opened Suburban Motors Used Cars in 1958 and owned and operated it until he passed. He also worked for Ford Motor Co. from 1957-1971 and also worked for Teledyne. His brother Dean Goodman started A&W Motor Sales and John admired his brother's career so much that he opened his own. Suburban Motors Used Cars started on Dixie Highway and then moved to Elida Rd in 1963 and is still open to this day. It was in business before the Lima Mall opened in 1965.

His favorite car was a 1956 Chevy Convertible and he got to take Shirley on their first date in that car. The best thing John did was marrying Shirley and his favorite thing to do was crack jokes and loved his career as a salesman. He never retired and chose to work until he passed. He was the best father you could ever ask for and his family will truly miss him. John made a lot of great friends through his car business and other dealers from other businesses. He was in the Merchant Marines as well.

"Give all praise to God."

There will be graveside services for John on Friday, November 4, 2016 at 11AM at St. Matthews Lutheran Cemetery in Cridersville. The family welcomes all to attend.

Online condolences may be made by visiting www.chamberlainhuckeriede.com.