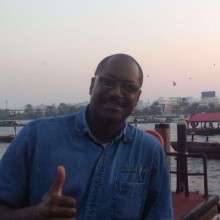 On May 23, 1966, a baby boy was born to Israel and Edna Mae Smith, and his name was Joe N Smith. He was the fifth child of eight children. He was born in Opelousas, Louisiana. Ge grew up in Houston Texas and attended school on the North side of Houston Texas. He confessed his life to Christ at an early age at Ebenezer Missionary Baptist Church under the leadership of Rev. C.W. Amboree.

Joe was a member of Greater First Baptist Church since 1970 under the leadership of Pastor W.E. Gibbs. He served on the deacon board faithfully until his death.

Joe is preceded in death by both parents, grandparents, one uncle, niece, and a great-niece.He is survived by his brothers Bobby and Sandy of Houston, Texas, Ralph and (Rosie) of Chappell Hill, Texas and Rickey and Lionel of Brenham, Texas, two sisters, Belvin and Patricia of Brenham, Texas, his aunt, Mae Bell and uncle Hosea Hargrove of Brenham, Texas, and a host of other relatives and friends.