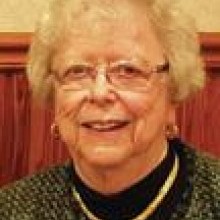 BEAVERCREEK — Jean Yvonne (Ebert) Autio, age 85, of Beavercreek, passed away peacefully on April 2, 2016, surrounded by her family. She was born on April 13, 1930 in Baraboo, Wisconsin. She was a devoted and loving wife, mother, grandmother, and great-grandmother. She was a nurse in the U.S. Air Force and later became a pediatric nurse associate. She worked with the Greene County Health Department and Children's Medical Center. She loved to travel and especially enjoyed family vacations to Disney World and Hilton Head. She also enjoyed watching sports especially her Cincinnati Reds and Green Bay Packers. She belonged to the Xenia Republican Women's Club, the Society of Air Force Nurses, and was an alumni of Central State University. She was preceded in death by her parents, Erich and Frances (Matthews) Ebert, her step-father John Litscher, and her brother Carroll (Bud) Ebert. She is survived by her loving husband, of 61 years, Clyde Autio, her daughter and son-in-law Kim and Steve Halula of Mequon Wisconsin, her son, Kerry Autio of Springboro, seven grandchildren, Elizabeth, Christian, and Rachel Autio, and Carey and Jamie Halula and Shea and Kristen Halula, and five great grandchildren, Lilly, Bennett, Maia, Gavin and Liam Halula. Visitation will be 10:00 A.M. on Friday, April 8th at First Baptist Church of Kettering. Services will follow at 11:00 A.M. A reception will follow the service. Burial will be at the Dayton National Cemetery on Friday, 3:30 P.M. In lieu of flowers contributions can be made to the Voland Family Scholarship c/o Cedarville University, 251 North Main Street, Cedarville, Ohio 45314 or at cedarville.edu/giving. Condolences may be sent to www.tobiasfuneralhome.com.