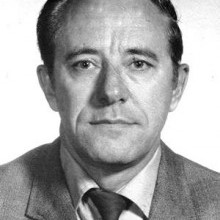 FAIRBORN — James Gevedon – age 92, died in Knoxville, Tennessee after a lengthy illness on Saturday, October 1, 2016. He was born on December 8, 1923 in Grassy Creek, Kentucky. He was the son of Estill Curtis Gevedon and Anna Dora Gevedon. He had two brothers and four sisters, and is survived by one brother, Lasker Harold Gevedon, of Fairborn, Ohio. He is survived by his loving wife of 69 years, Elizabeth Marie Gevedon, of Knoxville, Tennessee, and his three children, Sandra Gevedon Olive, of Knoxville, Tennessee, James Gary Gevedon, of Centerville, Ohio, and Steven Ray Gevedon, of Somerset, Kentucky, as well as his six grandchildren and twelve great grandchildren, and his many daughter-in-laws, son-in-law, nieces and nephews and friends. He retired as a union representative at Delco Products, Dayton, Ohio in 1980 and moved to Knoxville Tennessee in 1991, spending winters in Florida, where he had many friends. He will be missed by all who knew and loved him. There will be a visitation on Friday, October 7, from 5:00 – 7:00 pm at Belton-Stroup Funeral Home, 422 E Dayton Yellow Springs Rd, Fairborn, Ohio. The funeral will be on Saturday, October 8, at 10:00 am at the funeral home. The interment will follow at Byron Cemetery, 3256 Trebein Road, Fairborn, Ohio.