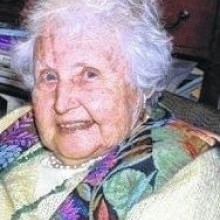 She was born on Oct. 29, 1919 in Drakes Branch, VA to Elsie Jackson Loving and Pearce Loving. She attended Women's College (UNCG) where she was Phi Beta Kappa and editor of the school newspaper.

She received an MA in English from Duke University, and went on to be become a news reporter for The Durham Sun and Richmond Times Dispatch. She was hired to teach English by A.B. Gibson in Laurinburg, and they were married in 1944 during WWII in Long Beach, CA.

She published three volumes of poetry: Home In Time (1977), Drakes Branch (1982), and Frayed Edges (1995). She loved her cottage at Sunset Beach "Saving Grace," and she loved to travel the world with her friends and grandchildren as far and as often as she could.

A memorial service will be held Thursday, Oct. 20, at 11 am at First United Methodist Church. Burial will be private. The family will receive friends following the service in the church fellowship hall.

In lieu of flowers, she would wish you to be kind and generous to someone in the world and contribute to the .

McDougald Funeral Home and Crematorium is serving the family.