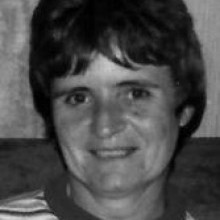 Eleanor was born on Verona Island on Nov. 6, 1937, one of 11 children born to John W. and Geraldine F. (Connolly) Verow. Throughout her life, Ellie was very proud to have been born into such a large family.

She was a communicant of St. John's Church in Bangor and a graduate from John Baptist High School. Eleanor worked at The Sub Shop in Bangor, and loved the camaraderie within the team.

No matter where the family called home, Eleanor made sure it was warm and welcoming to her family and friends. It was not uncommon for her to have freshbaked bread or cookies to serve to her guests.

In 1983, the family moved to Sanford and eventually purchased a home in Waterboro, where they lived for the past 27 years. Eleanor worked in food service at Sprague Electric for many years, where she surprised her co-workers with a homemade custom outfit for each holiday! Though she was small in stature, you knew that Miss Eleanor was in charge; she was the boss!

When her granddaughters JoAnn and Julia were born, Eleanor would get up early and go to their home to take care of them while their parents worked. They were "Grammy's Girls," and until they entered elementary school, it was Ellie who fed and nurtured them physically and emotionally with her unconditional love. She was most content when everyone came home for the holidays. Eleanor was a devoted wife, mother and Grammy, and will be dearly missed.

Eleanor was preceded in death by a son, Christopher Doucet, in 2014, and by her siblings Earl, Mary, John, Ethel and Lester.

She is survived by: her loving and devoted husband of 55 years, Richard W. Doucet Sr. of Waterboro; a son, Richard Jr. of Brewer; a daughter, Kathy Ann Legere of Georgetown, Colorado; a daughter-in-law, Dawn Doucet of Sanford; her favorite granddaughters, JoAnn Lynn Doucet and Julia Dawn Doucet, both of Sanford; four sisters, Betty, Barbara, Connie and Gloria; a brother, Ron; and many nieces, nephews and cousins .

A memorial service and celebration of Eleanor's life will be held at 10 a.m. Monday, April 25, at Autumn Green Funeral Home, 47 Oak St., Alfred.

A sincere and heartfelt acknowledgment to Dawn Doucet, a devoted daughterin law, and Daryl and Rose Lovejoy of Waterboro, the best friends and neighbors anyone could have. A special thanks to Gosnell Hospice House for its compassion during a difficult time.

To leave a message of condolence for the family, please visit autumngreenfuneralhome.com.

In lieu of flowers, please consider donating to the Gosnell Memorial Hospice House, the , the or a .