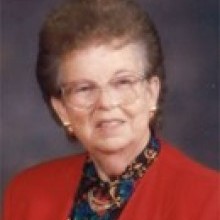 Mrs. Audrey Viola Mortensen (nee Swanson), age 92 years passed away on Saturday, November 5, 2016 in the Hogarth Riverview Manor. Audrey was born on May 25, 1924 to parents Conrad and Hulda Swanson in Kenora, Ontario. She graduated nursing at PAGH in 1946. She worked as a Head Nurse on 6 East at the Port Arthur General Hospital. She played piano and was a graduate of the Royal Conservatory of Music. In her youth, she was an organist for Bethesda Lutheran Church in Kenora. Audrey married the love of her life Sigvald Mortensen on August 19, 1947. Audrey was a longtime member of the Trinity United Church, she sang in the Trinity Choir and Thunder Bay Symphony Chorus. She was a member of the Scandinavian Home Society, Viking Club, Pass Lake Historical Society and a Volunteer at the Regional Hospital. Audrey will be sadly missed by her son Richard (Jennifer), her daughter Karen (Terry) Paul, by her grandchildren Ryan (Erin) Paul, Michael (Jenn) Paul, Elizabeth Mortensen, Jeannie (Lucas) Palamarek, by her four great grandchildren Emma, Sean, Olivia and Theoren Paul, by her brother Roger Swanson of Kenora, her niece Dale Swanson and nephew Blair Swanson. Audrey was predeceased by her husband Sigvald (2002), by her parents Hulda and Conrad Swanson and by her brother Arthur in infancy. A memorial service for Audrey will be held at 2:00 p.m. on Thursday, November 10, 2016 in the Chapel of Sargent & Son Funeral Chapel 21. N Court Street with Rev. Randy Boyd presiding. Interment will take place at Riverside Cemetery. In lieu of flowers, donations to the Alzheimer's Society or to the Trinity United Church would be greatly appreciated.