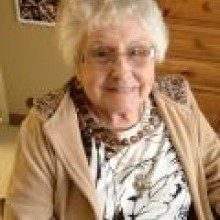 Xerxa Sue Wheeler was born on May 14, 1923 in Brownwood, Texas to Arleigh Clois Grubb and Neoma Elizabeth Tarver Grubb. Surrounded by loving family, she died November 22, 2016 following a brief illness.

Douglas Wheeler and Sue Grubb were married on March 21, 1941 in New Braunfels, Texas. After Douglas returned from overseas Air Force service during World War II, the family moved to Deer Park, Texas in 1946. There Douglas and Sue raised their three children, Carolyn, Douglas Jr., and Lisa.

The needs of the family always came first with Sue. She was an accomplished seamstress, who kept her children well-dressed. She did not shy away from taking care of pets, even son Doug's snakes. Her cooking was superb and will always be remembered. Sue's grandchildren always looked forward to a stay with "Nonnie", where grandson Chris could eat nonstop pancakes. Granddaughters, Paula and Angela, not only enjoyed her cooking but also their visit time with "Nonnie" and absorbing her wisdom. Grandson, Otis has been a source of strength and much appreciated by "Nonnie". Grandsons Jacob and Jordan could always count on "Nonnie" to be there for them. She was a loving, nurturing afternoon caregiver well into her 80's for granddaughter Julianne. Sue's devotion and encouragement gave the family a strong, firm and enduring foundation.

Sue was active in the community. She was a member of Deer Park's First Baptist Church. Many babies were rocked in the nursery during her years of volunteering there. Sue and Douglas were active members of the Silver Set Sunday School Class. She was also a volunteer at San Jacinto Manor. Sue worked with LaFond Ghormley, Stuzy VanTrease, Mary Dorris and others to develop the first private kindergarten in Deer Park. In her later years, Sue's talents in ceramics and doll-making were displayed at the Maxwell Center.