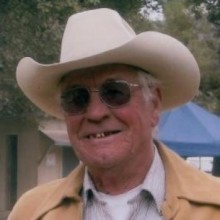 William R. Keith Lambert, 80, passed away peacefully at his home in Jamesburg, CA in Carmel Valley, on August 7, 2015. The first son of William Gordon Lambert and Marion Keith Lambert, Bill was born on March 11, 1935.

As a 4th generation Californian, Bill grew up in Jamesburg where his father, William G. Lambert, was a rancher, hunting guide, horseman and Deputy Sheriff. William G and Marion owned and operated the Lambert Ranch, and Marion operated the Jamesburg branch of The County Library and Jamesburg Post Office.

Bill attended grade school in the local one room school until high school, when he moved to Salinas to attend Salinas High. While in high school he showed horses and roped competitively, winning the Jr. State Championship in team roping in 1950.

Bill spent much of his young life as a hunting guide and cowboy. He married his first wife and high school sweetheart, Nancy Rose Del Conte, in 1955 and had six children. He attended college at Cal Poly, San Luis Obispo where he earned dual Bachelor's degrees in Animal Husbandry and Farm Management from the newly formed Agricultural Science Department in 1959.

After college Bill began what would be a 21-year career with Bruce Church Inc. He started as Ranch Manager and advanced to Special Projects Manager. His duties included planting and plant propagation in Salinas, the Central Valley and Arizona. It was during this time as Special Projects Manager that he designed and built a precision lettuce seed planter. He also revamped the crop-thinning program during the height of the unionization movement of the 1970s.

After his departure from Bruce Church Inc., Bill fulfilled a dream to farm independently in the Salinas Valley, growing lettuce and mixed vegetables, until the downturn in the economy necessitated closing the business.

Bill married Kathleen Ciucci in 1982 and returned home to Jamesburg in Carmel Valley where he established Lambert Grading and Excavating, which he owned and operated until his death. He also worked as a heavy equipment operator for various companies such as Stew's Plumbing, and Peninsula Septic Tank Service (PSTS). He was employed at PSTS for approximately 15 years.

Bill met his soul mate and longtime partner, Linda G. Richards, in 1992. Together they built a rich and happy life in Jamesburg, sharing their passion for family, hunting, fishing, camping and various adventures.

He will be greatly missed by all.