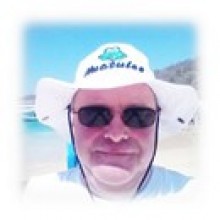 It is with very great sadness that we announce the passing of Mr. William (Bill) David John Genik, age 58 years. He passed away peacefully in Thunder Bay Regional Health Sciences Centre on Tuesday, December 6, 2016. Bill was born on May 6, 1958 in Dryden, Ontario. While living in Northwestern Ontario as a small child, he quickly developed a love for the outdoors, especially hunting and fishing. Bill moved around a lot in his early years, eventually getting settled in Kenora in 1968. He graduated from Lakewood Secondary in 1976. He started out working in the stud mill in Kenora before moving to Great Lakes out of Savant Lake. While working for Great Lakes, he would travel on the weekends to help his parents at their camp on Highway 105 Cliff Lake. He finally put down roots in Ignace, where he met Debra, his wife and Anita, his daughter. He was active in the community with the Kinsmen Club and the Curling Club. He had a son, Jonathan in 1987. In 1992, he started working for Ricci's Trucking where he started out driving truck, moved into parts, then moved into his current position of Operations Manager. Bill loved his job. In 2009, he became a Papa to Weston and again in 2011 to Dayton. They were the apple of his eye. Bill was everybody's rock. He was the very best of everything you could ever hope for in a husband, father, grandfather, brother, uncle, and friend. If you had a problem, he could always find the answer. He was the voice of reason and was always there to offer a witty remark with his wry sense of humour He always looked forward to his spring, summer and Christmas holidays, all of which he loved spending with his family and friends who meant everything to him. Bill is survived by his loving wife of 31 years, Debra (nee Taddeo), children Anita (Sheldon) Lochhead and Jonathan (Chantelle) Genik, grandchildren Weston and Dayton Lochhead, siblings Terry (Arlene) Genik and Ed Genik, his mother Pearl Genik and numerous nieces, nephews and other relatives. He was predeceased by his father, John Genik. Celebration of Life for the late William (Bill) Genik will be held on Sunday, December 11, 2016 at the Northwoods Motor Inn in Ignace, Ontario, from 1:00 to 3:00 p.m. Cremation has taken place. Interment will take place at a later date. In lieu of flowers, should friends so desire, donations may be made to either the Canadian Diabetes Association or Alzheimer's Society by way of the Westfort Chapel, Everest of Thunder Bay. Please sign the online condolences at everestofthunderbay.com