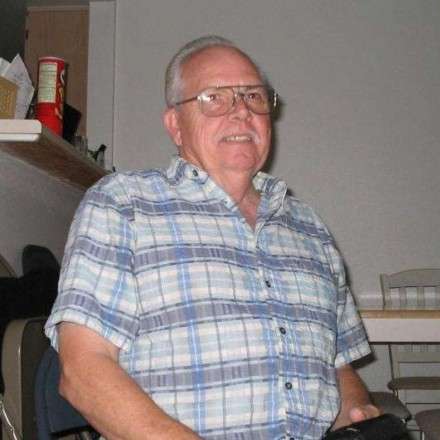 He was a printer operator for Dennison Eastman Tag and Label in San Pablo CA for over 20 years.  He served in the United States Navy Aboard the USS Ranger CVA-61, S-2 Division as a Cook.  He was a Boy Scout and later a Scout Master.  He served many years in the Baptist Church as a Deacon and loved the Lord greatly.

His love for his family was paramount, he was always proud of his kids and would often say so. Fond memories; He was a great provider, hardworking and had a great sense of humor.  His laugh was infectious (usually preceded by a joke) and remembered by his grandchildren.  In his younger days he loved to play music, mostly country, all through the house.  He would save all his favorite songs to reel-to-reel and let it play for hours.  He liked to dance with his wife and would sometimes be heard singing to her.  He played a little guitar and would play for his kids often.  On Halloween he always found the biggest pumpkin on the lot, so big a small child could fit inside, He always picked out the biggest Christmas Tree and would spray it white with flock for mom, once he even sprayed her with flock as she ran away screaming and laughing.  On the fourth of July he always had the biggest fireworks display on the block and enjoyed putting on a show, inviting friends and neighbors.  He was a great teacher of trades, taught his son wood working, plumbing, electrical, Mechanics, cooking and other life skills.

Although later in life he made many a mistake, he was always the first to admit his faults and to ask for forgiveness.

In lieu of flowers, friends and loved ones are invited to post memories to this website and make a contribution in his memory to Idledale Community Church, PO Box 180, Idledale CO 80453.  Or to a charity of your choice.