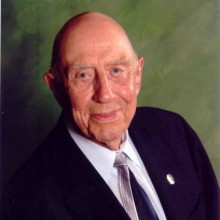 William (Bill) left us on October 17, 2015 at the age of 97. Born in Exeter, California, he grew up in Grants Pass, Oregon. Bill attended Stanford University, receiving a BA in Civil Engineering. In 1941 he entered active duty in the Ordnance Department of the United States Army. During World War II, he served in staff and command positions in the Office-Chief of Ordnance and The European Theater of Operations, assigned to the Second Air Division of the Eighth Air Force, then transferred to the Services of Supply of the Supreme Headquarters Allied Expeditionary Forces-Europe. He participated in the Normandy, Northern France, and Rhineland Campaigns from June, 1944 to May, 1945. In 1946 he returned to Stanford University and received his MS Degree and Degree of Engineer (CE) in Structural Engineering. In 1951 he was recalled to active military service during the Korean War and served as an Ammunition Specialist in the Ordnance Corps. His military assignments took him to various locations in the United States and around the world, including The Pentagon, White Sands Missile Range, Japan and Korea. He retired in 1969 with the rank of Colonel. His military decorations include the Bronze Star Medal and the Legion of Merit. Following his retirement he was an engineer with Fairfax County, Virginia in the Department of Environmental Management. Bill was affiliated with the American Society of Civil Engineers; The National Society of Professional Engineers; Tau Beta Pi; Sigma XI; and Military Officers Association of America. He is survived by two daughters: Anne Christine Bromley of Encinitas, California and Kim Bromley of San Rafael.

In lieu of flowers, friends are requested to make contributions to the National Museum Of The United States Army or The Alzheimer’s Association.

Donate to Alzheimer's Association in memory of William.