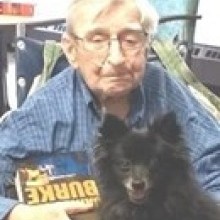 Winiecke, Walter M.Walter M. Winiecke, age 83, of Stevens Point, died September 22, 2017 at North Haven Assisted Living in Stevens Point.Walter was born on January 7, 1934 in Milwaukee, WI to the late Leonard & Angeline (Nowak) Winiecke. He grew up there and attended the local schools.Walter was an avid reader, he read most of the books at the Amherst and Stevens Point libraries over the years, in fact they even called him the "Book Duster". He enjoyed having family as company and visiting with other people. Walter was also a devout Catholic and was dedicated to saying his Rosary several times a day and praying endlessly for everyone that he loved. He is survived by his brother John Winiecke ( Emily ) of Stevens Point and also by the loving family of Cory Dombrowski whom Walter resided with for the past eleven years.A Funeral Service will be held at 2:00 p.m., Thursday, September 28, 2017 at Boston Funeral Home with Deacon Art Schaller presiding. A Time of Visitation will precede from 1:00 p.m. until the time of service at the funeral home. Interment will take place in St Michaels Cemetery in Beaver Dam, WI.Online condolences may be made to www.bostonfuneralhome.net.