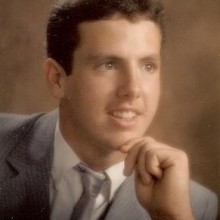 Memorial services will be held 1:00 p.m., Saturday, October 22, 2016, at 35973 Cherrywood, Yucaipa, California 92399. Local cremation arrangements are under the care of the Kincannon Funeral Home.

Walter James Robbins, Jr. was born on October 2, 1968 in Upland, California to Walter James Robbins II and Patricia Darlene Gibson. He grew up in California and graduated from Bloomington High School where he excelled at playing baseball. He was a truck driver for many years. Walter was a born again Christian and a very loving father. He enjoyed football, baseball and playing Texas hold-em.

His father Walter J. Robbins II preceded him in death.

Memorial contributions may be made to Jackson County Memorial Hospital Hospice, 1200 E. Tamarack Road, Altus, OK 73521 or by calling 580-379-6900. Online tributes may be made at kincannonfuneralhome.com.