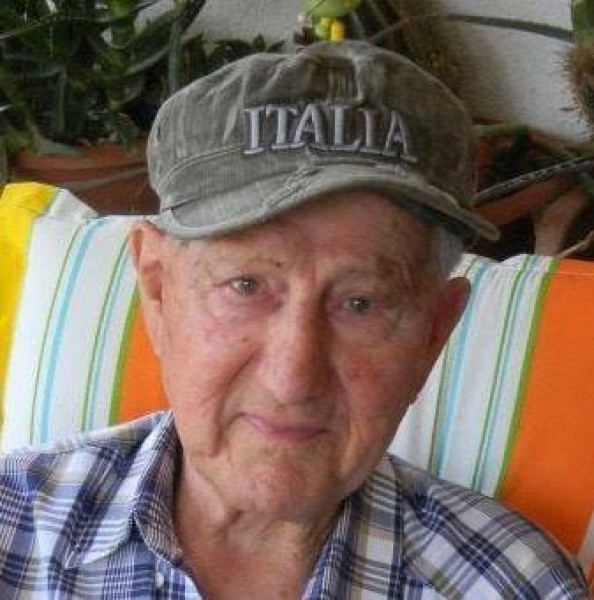 "I have no regrets. If I had to do it all over again, I wouldn't change a thing" - Val Andreacchi

Valerian Joseph Andreacchi, our beloved "Uncle Val," passed away on Sunday, November 5, 2017, peacefully in the comfort of his home in Daly City. He passed at the impressive age of 101.

Uncle Val was born in Bennington, Vermont, on August 16, 1916, to Maria and Domenico Andreacchi, immigrants from the Calabria region of Italy. He was the third born in a family of six and is preceded in death by all of his siblings, Louis, Annie, Joanne, Rachel (Rae), and Nicholas.

He married Grace (née Jones) on June 25, 1940. “She was the love of my life. She was the best thing that ever happened to me." They resided in the New Rochelle for three years until Val enlisted in the Army Air Corps in 1943 during World War II. Thanks to his trade school education, he qualified to be a Radio Technician and served with the 464th Air Service group in the European Theatre from 1943 to 1946. In his later years, he proudly wore his World War II Veteran's hat everywhere he went, and as a result, he regularly soaked up appreciation of his service from strangers.

Upon his return home to New York, he resided in Mount Vernon with his beloved Grace until 1951 when they moved, along with his siblings, to San Francisco. In 1953, Grace and Val settled in a house in Daly City, where Uncle Val lived until his passing.

Val's first job was at a supermarket in Connecticut. Years later, he became a Manager for San Francisco's Safeway stores, a position he held from 1951 until his retirement in 1976.

He spent his early retirement years traveling with Grace, frequently visiting her relatives in New York and spending time in England and Italy. On one of their trips to Italy, they visited the town of Petrizie, where Val’s parents were born. There, they encountered a man in the streets who saw Val and not knowing him at all called out to him by his Grandfather’s name, Valeriano who happened to be his namesake. That same man introduced Val to relatives, with whom he built and shared a bond with until his last day.

At the age of 82, Grace showed the first sign of Alzheimer’s, which she battled for 10 years with Val never leaving her side. He cared for her faithfully until she passed away in 1995. As a reminder of his love and commitment to her, he wore a bracelet with both of their names engraved on it until a year ago when it eventually broke. Grace is laid to rest at her family's private plot in Mount Vernon, New York.

After Grace passed on, Val continued to travel the world, visiting 29 countries and feeding his adventurous spirit. At the age of 95, he took a trip he always wanted to take, visiting Israel, "the Holy Land," and Dubai. (He wanted to know "what all the fuss was about Dubai" and see the tallest hotel in the world.) Happy to travel alone but some of his favorite travels were visits to Italy with his nieces and nephews.

Val Andreacchi did everything in his life wholeheartedly. He was a devoted husband, a dutiful and loyal U.S. Veteran, and a dedicated brother to his siblings and their families, stepping in as a father figure or grandfather figure for many nieces, nephews, and great-nieces and nephews.

He was a man who valued family connections and was very much the glue for his large and extended family. He showed up to football games, family dinners, birthday parties, weddings, baptisms, breakfasts, and lunches, and if it was a family dinner, he was never without a bottle of his favorite two-buck chuck for the host or hostess. He showed kindness and generosity to each and every one of his relatives—and especially to those in need. He developed strong ties and friendships with other families and especially enjoyed his companion Margo who he met in his 80’s,

He was a man of his word and a man of few words. When Uncle Val spoke, you listened both out of respect and a desire to learn from his wisdom. He also had a wry sense of humor you didn’t want to miss. On any given day, you could hear him mumbling his favorite phrases—"Poor old man" or "Dammit Nick!" He enjoyed sharing stories of his time as a World War II soldier and about growing up in Vermont and New York. The thread that tied seven generations together, he held tremendous family insight and wisdom, and to be in his company was a gift for anyone who had the opportunity.

As a Catholic, he stayed connected to his local parish and read his Bible at night. His faith was most beautifully demonstrated in the way he treated and cared for others.

Thank you from all of us, Uncle Val, for living a life of example, for serving your country, and for devoting yourself to your wife and your family and being a good friend to those along the way. We are your legacy, may your values, faith, and love live on through us and how we care for one another until we meet again.

We are celebrating Uncle Val’s life on Monday, November 13th, at Duggan’s Mortuary in Daly City at 10 AM. Immediately following the service we will escort him to his final resting place at Olivet Cemetery in Colma.