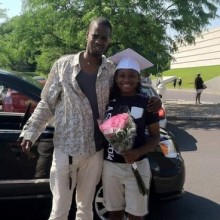 As a child, Tony went by Justice. Until his last day, he went by that name. Tony loved playing ball, and listening to music. Everything he did was for his kids and to make sure they were happy. Tony met Jamie Sams in his teenage years and had their first child, Tony Sams on March 22nd, 1994. Three years later they conceived Alize Sams. He then met Valrie Bass Alexander in 2005, married her 2007, and had his last child, Brooklyn V. Alexander, March 29th, 2007. He also is survived by 1 grandchild, King Gavin Thomas.

Tony was a loving family man that loved taking trips to water parks. Anything to make his family happy he did it. He continued to be adventurous and tenacious enjoying his life until the bitter end.

Tony was a man of his word, He would get a kid one day the next day he had a promotion. Tony was in love with cars leaving behind 4 cars for each of his kids. Tony was a strong and courageous man who battled bone cancer in 2003 and remained in remission up until his death. Tony was a generous man who donated money to kids without families every Christmas sometimes 3 times a year.

The Lordis my Shepherd, I shall not want. He Margery me to lie down in green pastures: He leadeth me beside the still water. He restoreth my soul: He leadeth me in the paths of righteousness for his names sake. Yea, though the valley of the shadow of death I will fear no evil: for thou art with me; Thy rod and Thy staff they comfort me. Thou prepares a table before me in the presence of mine enemies: Thou anointest my head with oil: my cup runneth over. Surely goodness and mercy shall follow me all the days of my life: and I will dwell in the house of the Lord forever.