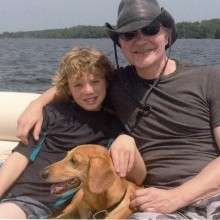 Men wanted to be him and women wanted to be with him.  Todd Opper died on April 6th, 2018 from injuries sustained in a one-vehicle accident in Wauwatosa Wi.

Todd is survived by his Wife Dana opper and two children Hayden and Benjamin.  His father Clayton of Merrill Wi. His Brother Codey Opper of Wausau Wi.  And his Grandmother Barb Wagner.  He is preceded in death by grandparents, Ray and Jannet Opper, Sister Tammy Opper, and half-sister Lisa Rohde.  Todd loved fried southern food smothered in his own homemade maple syrup, Two and a half men, Hunting, fishing, his wife  and his children.

Services will be held at 10 a.m. Tuesday, May 17, 2018, at Our Redeemer Lutheran Church LCMS. 10025 W North Ave, Wauwatosa, Wisconsin 53226.  Gary Folters will officiate.  Luch will be served directly after service in fellowship hall.

Living one day at a time; Enjoying one moment at a time; accepting hardship as a pathway to peace.