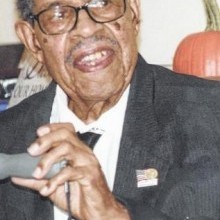 Son of the late Thomas Jones Sr. and Viola Jones Moore, he was was born on March 21, 1922 in Hamlet. He joined First Baptist Church on West Avenue in Hamlet where he served on the trustee board, church treasurer and the Layman League. He later joined New Hope Baptist Church. He worked for Seaboard Coastline Railroad for 40 years, McEachern Funeral Home and Nelson Funeral Home. He also served in the U.S. Navy for two years. For a number of years, he worked for Railroad Express.

Funeral services will be at 1 p.m. Tuesday at New Hope Baptist Church where the Rev. John Jackson is pastor and the Rev. T.R. Davis will be officiating.