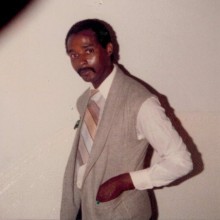 Theartis Herbert was granted his angel wings on June 16, 2015 at his home in Hercules, California surrounded by his loving family.

Theartis Herbert was born in Cincinnati, Ohio to the proud parents of F.M. Herbert and Annie Lee Herbert. He moved to Detroit, Michigan with his family in September 1953. He attended and graduated from Central High School. He enlisted in the United States Army for a tour of 4 years.  Shortly after being discharged, he returned to Detroit, Michigan. He went on to earn his Bachelors of Science Degree at Michigan State University.

He relocated to San Francisco, California in 1978.  He worked at Maritime Shipping Company, Southern Pacific Railroad, and Hibernia Bank. He worked for University of California, Berkeley for 27 years as a Programmer Analyst II and Principal Data Processing Production Control Coordinator.

Theartis had an outgoing personality and an everlasting smile that would light up any room he entered. His kindness and welcoming support were undeniable to all. If you had the chance to experience his caring and thoughtful personality, you were one of the lucky ones. Theartis was a wonderful Husband, Father, and Brother-in-Law. He will be missed by many.

A host of Nieces, Nephews, Cousins, Great Nephews, and Great Nieces. Abundance of Co-Workers and friends who were each very special to him in their own special way.

Theartis was loved by many who came in contact with him.

HE WILL FOREVER BE IN OUR HEARTS AND PRAYERS