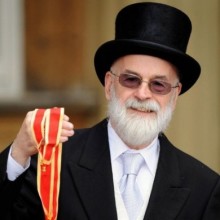 Terry Pratchett, the immensely popular British fantasy novelist whose more than 70 books include the series known as Discworld, died on Thursday at his home near Salisbury, England. He was 66.

Suzanne Bridson, an editor at Transworld Publishers, which publishes Mr. Pratchett’s books, said in an email that the cause was posterior cortical atrophy, a rare form of dementia.

An accomplished satirist with a penchant for sending up cultural and political tomfoolery, Mr. Pratchett created wildly imaginative alternative realities to reflect on a world more familiar to readers as actual reality.

Often spiced with shrewd and sometimes wryly stinging references to literary genres, from fairy tales to Elizabethan drama, his books have sold 85 million copies worldwide, according to his publisher. And though Mr. Pratchett may have suffered from the general indifference of literary critics to the fantasy genre, on the occasions when serious minds took his work seriously, they tended to validate his legitimate literary standing.

In 2003, the novelist A..S. Byatt wrote that critics were paying attention to the Harry Potter books by J..K. Rowling but rarely to other fantasists.

“They do not now review the great Terry Pratchett,” Ms. Byatt wrote, “whose wit is metaphysical, who creates an energetic and lively secondary world, who has a multifarious genius for strong parody as opposed to derivative manipulation of past motifs, who deals with death with startling originality. Who writes amazing sentences.”

Mr. Pratchett’s primary setting, Discworld, is a planet of sorts, Frisbeelike in shape and balanced on the backs of four elephants who themselves stand upon the shell of a giant turtle.

Mr. Pratchett introduced Discworld in 1983 in the novel “The Color of Magic.” Its protagonist, Rincewind, who is among a number of recurring characters in the series, is a feckless wizard-wannabe who was an unsuccessful student at Unseen University, the principal school for wizards in the city-state of Ankh-Mopork.

Over three decades and 40 or so volumes (a handful of which were aimed at young readers), Discworld grew into a multilayered society inhabited by witches, trolls and other creatures of varying personalites and powers who often seem to re-enact the follies of Englishmen and other Earth people.

Death is a character in almost all the Discworld books, speaking in dialogue written in capital letters and expressing fascination with humanity. Mr. Pratchett often wrote with an arched eyebrow and a tongue planted firmly in cheek; in the behavior of his mythical creatures, it was hard to miss the barbs being tossed in the direction of humanity.

“Of course, Lord Vetinari, Patrician of Ankh-Morpork, would occasionally meet Lady Margolotta, Governess of Uberwald,” he wrote in the most recent Discworld book, “Raising Steam” (2013). “Why shouldn’t he? After all, he also occasionally had a meeting with Diamond King of Trolls up near Koom Valley, and indeed with the Low King of the Dwarfs, Rhys Rhysson, in his caverns under Uberwald. This, as everyone knew, was politics. Yes, politics, the secret glue that stopped the world from falling into warfare.

“In the past,” he continued, “there had been so much war, far too much, but as every schoolboy knew, or at least knew in those days when schoolboys actually read anything more demanding than a crisp packet, not so long ago a truly terrible war, the last war of Koom Valley, had almost happened, out of which the dwarfs and trolls had managed to achieve not exactly peace, but an understanding from which, hopefully, peace might evolve. There had been the shaking of hands, important hands, shaken fervently, and so there was hope, hope as fragile as a thought.”

Mr. Pratchett learned he had posterior cortical atrophy in 2007. A degeneration of the outer layer of the brain, the condition that may be a variant of Alzheimer’s disease. He gave interviews and speeches about his condition, which he referred to as “an embuggerance.” In 2008 he contributed $1 million to Alzheimer’s research. He was also an outspoken advocate for the legalization of assisted suicide.

He became Sir Terry when Queen Elizabeth II knighted him as 2008 turned to 2009.

In a Twitter post on Thursday, David Cameron, the British prime minister, said Mr. Pratchett’s books had “fired the imagination of millions, and he fearlessly campaigned for dementia awareness.”

Terence David John Pratchett was born on April 28, 1948, in Beaconsfield, Buckinghamshire, northwest of London, to David Pratchett, an engineer, and the former Eileen Kearns. He did not finish school and was fond of saying that he received his best education at the Beaconsfield Public Library. An early interest in astronomy spurred his reading of science fiction.

He worked as a journalist for a newspaper in Buckinghamshire and in 1971 published his first novel, “The Carpet People,” about a tribe, known as Munrungs, that lives on a vast carpet.

“Glurk could throw a spear farther than anyone,” Mr. Pratchett wrote about the ascendant chieftain of the Munrungs. “He could wrestle with a snarg, and wore a necklace of their long yellow teeth to prove it. He could lift a horse with one hand, run all day without tiring, and creep up so close to a grazing animal that sometimes it would die of shock before he had time to raise his spear. Admittedly, he moved his lips when he was thinking, and the thoughts could be seen bumping against one another like dumplings in a stew, but he was not stupid. Not what you’d call stupid. His brain got there in the end. It just went the long way ’round.”

Mr. Pratchett’s other books include “The Unadulterated Cat,” an illustrated (by Gray Jolliffe) collection of cat anecdotes; “Good Omens,” a comic fantasy about the birth of the son of Satan, written with Neil Gaiman; “The Dark Side of the Sun,” a science-fiction novel; and “Dodger,” a novel for children set in Victorian England and inspired by Dickens.

He is survived by his wife, the former Lyn Purves, and a daughter, Rhianna.

Three Twitter posts on Mr. Pratchett’s account on Thursday described his demise in imitation of his fiction.

“AT LAST, SIR TERRY, WE MUST WALK TOGETHER,” the first said.

“Terry took death’s arm and followed him through the doors and onto the black desert under the endless night,” the second said.

The third said simply, “The End.”