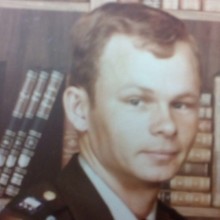 Steven Dale Woodruff, 63, a lifelong resident of Haines City, passed away on December 29, 2016 in an accident in Albuquerque, New Mexico.

He was born in Haines City to William Otha Woodruff and Louise Marie Bell Woodruff on February 13, 1953.  He graduated Haines City High School in May 1972 and attended Florida Southern College in Lakeland on an ROTC scholarship where he received a Bachelors degree in Psychology.

He was commissioned as a 1st lieutenant in the US Army on Dec. 18, 1977 and went on to serve in the United States Army from 1977 until 1985. He was qualified as an Airborne Ranger, pathfinder, and a member of the Special Forces. He spoke and read fluently in German. He served four and a half years in Germany where he served a year as the headquarters liaison with the German Army in Frankfort.

During that very busy time in his life he was also a very loving husband to Jessie Sue Thacker, and a loving caring father. They had four children together. He is preceded in death by his youngest daughter, Angela Michealle Holbrook, his brother Otha Woodruff, his father, William Otha Woodruff and his mother, Louise Marie Bell Woodruff. He is survived by his children Gary Wayne Woodruff and his wife Karen Coppedge Woodruff of Ft. Worth, Texas, Melinda Marie Woodruff Hill and her husband Barry Hill of Jonesboro, AR, and Steven Dale Woodruff II of Imboden, AR. He is also survived by his grandchildren: Brittany Nicole Woodruff Croft, Michael King, Katalina Holbrook, Victoria Woodruff, Elizabeth Hill, Chrissy Holbrook, Izzak Woodruff, and two great-grandchildren, Alice and Marshall Croft; and another one on the way.

Steven was a loving brother and friend to his siblings: Terry Woodruff and Felix A. Woodruff of Wellington, Alabama, Lorretta Mcgough of Alexandria, AL, Judy & Paul Swenson oF Bartow Fl, and Kathryn & Jimmy Deese of Haines City, FL.

Steven was also a very kind, loving uncle to so many darling nieces and nephews. He had more friends than you can shake a stick at!  We will all miss his crazy humor and endless smile.

He had a very free spirited nature and loved making everyone so happy. He was able to show his children the world and had many adventures that most people will never get the chance to experience.