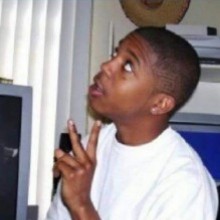 It was a blessed day when Steven Wayne Turner, was born April 20, 2001 to Toris and DeLinda Turner in Los Angeles, California. He was the youngest of 3 sisters and 2 brothers, whom he loved dearly and shared a special bond.

Steven attended Susan Miller Dorsey High School his freshman year until he relocated to the Inland Empire, with his sister Kimberly, where he attended Kaiser High School. For the short time he was there he was noticed to have a love of sports, especially basketball.

Steven was active in sports growning up. He played little league baseball at Rancho Cienega Park and junior varsity football at Dorsey High as all his brothers did.

Steven was kind to all that knew him, but he shared a special bond with his mother. Even if it was a trip to the store for some Hot Cheetos or a can of Axe the time they spent was indeed precious. Steven was a very loving kid. He loved to hang out with his family and play video games with his nephews and dress up with his nieces. Steven loved hanging out with his older siblings because he enjoyed the fact that he was the baby and was spoiled by all of them.

Steven will truly be missed by all that knew him. He was loved by many, many people.