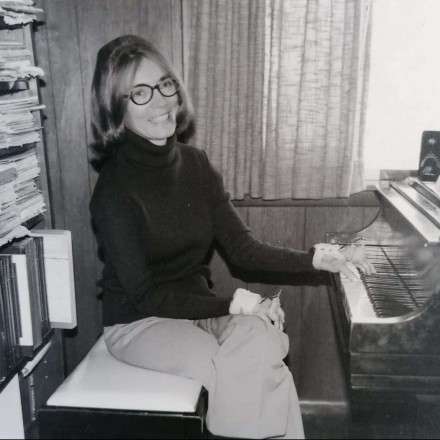 My dear sister, Sara Beene, has passed away. I would like to think she has passed into a realm where she can move nimbly and painlessly for the first time in decades. For most of her adult life Sara was challenged with rheumatoid arthritis and its many complications, but that catastrophic disease did not define who she was. Sara herself was the definition of what it means to bear such an illness with grace and determination. I can imagine her wafting free now in the music of her spirit, moving on while hovering near as she has since the beginning of my life.

When I was a baby Sara would take long walks with me down the steep, shady streets of Boonville, singing as she pushed the carriage where I slept, swaddled in song. She was 15 then. 16 years later, when our mother died, Sara became my legal guardian and I left Boonville to live with her family in Los Alamos, New Mexico. I was already an aspiring pianist and, in a way, Sara became my musical guardian too. You might say she accompanied me on my path to becoming, like her, an accompanist. I later moved overseas and our meetings became few and far between, but Sara was always there for me in spite of the physical distance separating us. During the past few years we often communicated by phone between my home in Finland and hers in Arizona. We would talk for hours about anything and everything from world events to our most intimate thoughts and feelings. Once again, as in the beginning, Sara was present to me as a disembodied voice. She didn't sing for me now, no, but her voice was still a familiar haven, a home I could always return to.

The single greatest challenge of Sara's life was having to cope with the loss of her daughter, Deborah, who died suddenly at the age of 12 in December, 1972. In November of that same year Sara had been diagnosed with RA. Life would never be the same again. The fateful coalescence of a disabling disease with inconsolable grief had immeasurable consequences for her health. The years ahead were difficult, but as Sara's body weakened, her spirit grew ever stronger. As time went on her broken heart slowly healed, becoming more open, more inclusive, more sensitive to the suffering of others and aware of the world around her. The hurt was always there but, in the end, it became a catalyst for personal growth. Witnessing this process from afar over the course of decades made me so proud of Sara. Her inner resilience and her refusal to give up in the midst of seemingly insurmountable difficulties were a constant source of inspiration for me.

Sara had lost her daughter, but she still had Mark, Deborah's little brother. Having this young boy to take care of–a boy who had also lost his sister–must have been a great help to Sara in her own grieving process. Mark grew up to be the ”gentle giant” Sara was so proud of. Mark, his wife Lori and their two daughters were always a vital source of joy and support for Sara, and she was fortunate to be able to spend her final years with them in their home in Tempe, Arizona. They meant the world to her, and she loved watching her talented granddaughters, Kayla and Marissa, grow up into successful, happy young women.

Sara was born June 3, 1937 in Boonville, Missouri. She was the third child of Woodard B. Hopkins Sr. and Erna Rowe Hopkins, a lone girl who had to hold her own between two older and two younger brothers. Growing up together, William, Woodard and Sara were a tightly knit trio. My brother John and I arrived on the scene much later. Sara often told me how William would try to get her to play football with him when they were children while Woodard was always content to play house with his little sister. Perhaps it is not surprising that Woodard and Sara were always especially close.

Music was highly valued in our childhood home. Sara , like all her siblings, studied piano with Amber Haley Powell, a dedicated teacher and colorful Boonville personage. Our father, who was director of our church choir, loved to sing and Sara would often accompany him. Sara went on to study piano at the University of Kansas. Before graduating she married a fellow music student, Don Beene, and they soon had a home of their own in Lawrence where Sara began to teach piano privately. Don and Sara later moved to Los Alamos, New Mexico and Sara continued teaching there. She was devoted to her students, but what she loved most was making music with other musicians. When accompanying others–instrumentalists or singers–Sara was at her happiest. Eventually, as decades passed, arthritis took its toll on Sara's hands and the time came when she could no longer perform in public. During this same period she went through a painful divorce. What courage it must have taken to move by herself from Los Alamos to a new home in Albuquerque, returning to school in her fifties to learn a new profession! Sara became an SLP and worked with children for years in the Albuquerque public school system before retiring. She loved working with children, but her greatest love would always be music.

When she was still active as a pianist, one singer in particular, Sheldon Kalberg, became Sara's closest friend and musical collaborator. Sheldon was director of the Sangre de Cristo Chorale in Santa Fe and Sara worked for many years as accompanist for the Chorale. Working with Sheldon gave Sara the greatest joy and fulfillment of her musical life. Sara, like Sheldon, was a special kind of musician. She was, quite simply, an artist. As accompanist she intuited, supported and complemented the musical ideas of others. Talent and sensitivity came together in her playing to help create those magical moments that all musicians hope to experience at least once in their lives. One of the Chorale's most meaningful performances for Sara was John Corigliano's Fern Hill, set to the poem by Dylan Thomas. Sara said she could feel Deborah's presence in that haunting, elegiac music and she played from the depths of her heart. Sara lived the music she played, but, at the same time, she was humble and unassuming. She didn't want to shine as a performer. She wanted the music to shine. Together, Sheldon, Sara and the members of the Chorale were able to create an abundance of magical moments. When Sheldon died in 2014 Sara was devastated. Her dearest friend, with whom she shared such beautiful, life-defining experiences, was gone.

Sara's favorite movie was the 1948 classic, The Red Shoes. The film came up several times in our conversations. Clearly, Sara resonated deeply with the story of the main character, Vicky Page. Vicky is a gifted dancer who is forced to choose between human love and art. She moves in a male-dominated world where women are often expected to make sacrifices that would not be demanded of men. When asked, ”Why do you want to dance?” her answer is, ”Because I must.” I can well understand why this film meant so much to Sara. In her own quiet but determined way she struggled to make her voice heard as an artist while fulfilling her chosen roles as wife and mother. Vicky Page's struggle was on a screen for all the world to see. Sara's was a private one, taking place within the sanctuary of her heart.

When I was visiting in her home in Tempe a few years ago, Sara said something that surprised and touched me. She said that sometimes, when no one else was around, she would sit down at her piano. There was one piece her fragile hands could still play: Bach's Prelude in C Major, BWV 846. I love to picture that scene. The door to her son's part of the house is open, but the rooms will be empty until Mark and Lori come home from work. She is there in her sunlit living room, placing her fingers on the keys of her Steinway grand. It is her own space where she is surrounded by the accumulations of a lifetime. Precious memories are near at hand, and, somehow, she is not really alone. And then, tentatively at first but becoming more and more sure with each chord purling beneath her hands, that simple but sublime music blossoms from silence as a living presence. A synthesis. A benediction.

In memory of Sara, please consider donating to the Deborah Beene Memorial Scholarship Fund. The fund is now administered by her son, Mark Beene, and supports annual music performance awards intended to assist ninth-to-12th-grade Los Alamos High School students in their musical growth. The students receiving the award are asked to use the money for fees to attend a music camp, for college or university music expenses, for the purchase of a better instrument, or for tuition for private music instruction.

To make a donation, a check to the Deborah Beene Memorial Scholarship Fund can be mailed to:

Donate to the Deborah Beene Memorial Scholarship Fund (details at bottom of obituary) in memory of Sara.