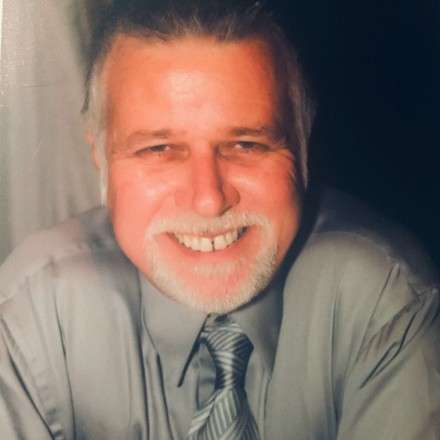 Ron S. Nicolosi was born May 16th, 1958 in Methuen, Massachusetts and passed away peacefully in his California home on July 28th, 2020. He was surrounded by loved ones and succumbed to health complications at just 62 years old. Ron is survived by his mother, Shirley Nicolosi, his brother Peter Nicolosi and wife Lois, and his nieces and nephews, Karen, Carl, Kathryn, Sally, Jodi, and Peter. His extended family includes many lifelong friends from childhood, the Theater/Television and friendly neighbors.

He is also survived by more cooking contraptions and baseball caps than we currently know what to do with...

Ron was the kind of person that lit up the room with his big smile and contagious laugh. After spending many years lighting up stages across Massachusetts, he continued to follow his “ultimate dream” to Hollywood, where he worked on various household sitcoms like Just Shoot Me!, Stacked, How I Met Your Mother and most recently, Carol’s Second Act. Ron was always cheerful on set and everyone loved to be around him.

After graduating from UMASS Amherst in 1980, Ron went on to teach Physical Education and then would become a dispatcher at Raytheon Missile Systems. All the while, Ron loved to entertain - and as a local paper would once write, he was a man of a thousand faces. “Throw a comedy his way and he takes on a role of a bumbling harlequin destined to make you laugh…give him a tragedy and he’ll reduce you to tears.” Off stage, Ron was proficient in tennis, swimming, rollerskating, playing the piano and posting Facebook pickle recipes or keeping everyone updated on the latest car chase.

Every wall in his home is garnished with cherished memories of colorful stage shots and celebrity group selfies. He lived a life sharing his numerous talents and magnetic personality.

“Someone once told me that acting is a dirty word … that it should never be used. On the contrary I’ve played a lot of characters over the years and the best one was ME. I just want to be my natural self and put that on stage. - Ron”

In lieu of flowers, please consider making a donation to the SAG-AFTRA COVID-19 Relief Fund: https://members.sagfoundation.org/donate