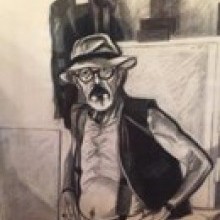 Mr. Rodney Sieben Frew died peacefully in his Springfield, Missouri home on June 28 at the age of 82. Rodney was born on August 14, 1934 in Jefferson City, Missouri to Douglas Fredrick Frew and Lydia Alberta O'Donnell (née Coleman). He joined the U.S. Navy in 1952 and was stationed at Bethesda Naval Hospital in Bethesda, Maryland, where he served as a hospital corpsman. He was honorably discharged in 1954. Rodney graduated from the University of Arkansas in 1959 with a B.S.Ed. and received his M.F.A. from the same institution in 1962. In the spring of 1970 he attended the University of Iowa for post-graduate study in printmaking with Mauricio Lasansky. In 1963, Rodney began teaching in the art and design department at Missouri State University (then Southwest Missouri State University). In his 34 years at MSU, he taught thousands of students the skills of drawing, painting and printmaking. His students remember him as a teacher who expected the best from each of them and gave his own best in return. His colleagues recall the energy he brought to the department and many holiday parties with his sarcastic wit and animated storytelling. He retired from MSU in 1997. Rodney was also an accomplished artist and master printmaker. His exhibition record was dense with significant national- and international-level juried exhibitions and many solo and two-person shows. He was particularly recognized for his traditional printmaking, including two notable series entitled Mr. Magic and Seven Deadly Sins. Many of his pieces are held in the permanent collection of the Springfield Art Museum, and numerous others are held in private and public collections across the U.S. He was also a dedicated golfer who played countless rounds at Green Hills Country Club in Willard, Missouri, often accompanied by local friends and golfing buddies. At one point he played to a single digit handicap, and posted a total of three holes-in-one. Rodney is survived by his daughter, Mary Lisa McDonald, his sons, Rodney Brian Frew and Morgan Sieben Frew; his brothers, Lawrence Patrick O'Donnell and John Frew, and his sister, Melinda Frew. He is preceded in death by his wife, Genevieve Susan Frew (née Smith), and his son, Kevin D. Frew. A memorial service in honor of Rodney Frew's life will take place July 18, 2017 from 6:00PM - 9:00PM at the Missouri State University Student Exhibition Center. In lieu of flowers, please send donations to the Rodney Frew Memorial Scholarship fund, established by the family to continue Rodney's legacy by supporting visual art students at Missouri State University. Donations can be made at the following: http://www.missouristate.edu/FrewMemorial