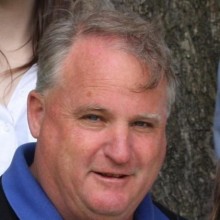 He graduated from Salinas High School 1981 and graduated from Fresno State University in 1985. He was a golf professional who was passionate about the sport and made a living teaching and running local golf courses including Sherwood Greens, Salinas Fairways, Pajaro Valley, and Arrowcreek.

Robert was a member of St Paul's Episcopal Church and a strong advocate of youth golf. In his youth, he became an Eagle Scout. He supported community involvement in both Salinas and Watsonville by hosting golf tournaments to raise funds for local charities.

Robert was preceded in death by his father Irving Bowker.

He is survived by his wife Theresa; two daughters Jaime and Nicole of Salinas, his mother, Nancy Bowker; three sisters Carolyn Bowker of Cupertino, Marilyn Dorman (Mark) and June Cornell (Darryl) of Salinas and one brother Keith of Salinas.

Donate to The First Tee of Monterey County in memory of Robert.