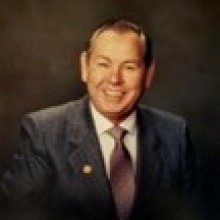 Richard "Dick" Young was born on Aug. 24, 1923, in Philadelphia to Lorenzo Snow Young and Catherine Aleine Margetts Young. Richard grew up in Salt Lake City and graduated in 1941 from East High School, where he was active in sports and music. He was an avid fan of amateur radio, obtaining his general class ham ticket in 1945, and he held the call letters W7-JJA throughout his life.

Richard enlisted in the U.S. Navy in 1943 and participated as a ship radio operator/technician in several invasions in the Pacific until his honorable discharge in 1946. He served from 1947 to 1949 on a Central States Mission for The Church of Jesus Christ of Latter-day Saints.

Richard attended dental school at the University of Washington in Seattle, and in 1955, he returned to Salt Lake City, where he practiced for four years.

In 1959, Richard was married to Barbara Ethel Weaver in the Idaho Falls LDS Temple, and in 1961, they moved to Salmon to establish a new dental practice. They raised their family in Salmon, where Dr. Young practiced dentistry until his retirement in 1993.

Richard was involved extensively in family, church, professional and community life. He was a member and held leadership positions in the Salmon Rotary Club, Salmon Toastmasters Club, Salmon Chamber of Commerce, American Legion, Williams Lake Water Board and was a life member of the ADA. He served in many church teaching and administrative positions and often sang in church and community choirs and ensembles. In 1979, Richard and Barbara established the Salmon River Playhouse, which in its 10 seasons, provided many locals the opportunity to participate in and enjoy amateur theater.

In 1990, Richard lost his wife, Barbara. His love and care for her as she suffered with cancer were exemplary. In 1991, Richard married Connie Mitchell, and the couple moved to Logan, Utah, and Yuma, Ariz. At the age of 80, Richard moved in with his daughter, Becki, and her family, who welcomed him as he struggled with the progression of Alzheimer's disease.

The last several years of Richard's life were spent at the VA Care Center in Boise, where the staff often commented on his cheerful nature. Even in the advanced stages of Alzheimer's, Richard loved music and could often be heard whistling familiar tunes.

Richard was a true gentleman. He was kind, considerate, cheerful, fun loving, compassionate, friendly, smart and generous. He was a wonderful son, brother, friend, husband, father and grandfather. He is loved and will be missed by all who knew him, but especially by his family.

Funeral services will be held at 1 p.m. Saturday, Nov. 26, at Salmon LDS Stake Center on Daisy Street. A viewing will be held prior to the funeral from 11:30 a.m. to 12:45 p.m. in the Relief Society Room. Interment will be in Salmon Cemetery. Military honors will be provided by American Legion Lloyd Shaw Post 67 and Idaho Honor Guard.

Arrangements are under the direction of Jones & Casey Funeral Home, www.jonesandcaseyfh.com.