"To live in hearts we leave behind is not to die." - Thomas Campbell 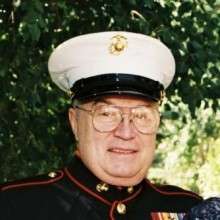 "To live in hearts we leave behind is not to die." - Thomas Campbell

Dick was born to Melvin Roy Fuller and Elsie Melvina (Goodwin) Fuller on December 29, 1946, in Springfield, Illinois. He graduated from Fairview High School in Boulder, Colorado in 1965. While at Fairview High School he lettered twice in wrestling; a fact that made his family very proud.

After high school, Dick attended the Colorado School of Mines, in Golden, Colorado before he volunteered for the U. S. Marine Corps in May of 1967. He served in the Vietnam War for 19 months and was given the nickname of Frog by his fellow Marines. During his time in the Marines he was awarded:

Richard was also awarded a Rifle Marksman Badge and two Good Conduct Medals for "Honorable and Faithful Service". On May 12, 1971, Dick was Honorably Discharged as a Sergeant from the U.S.Marine Corps. The discipline and patriotism he learned in the Marines never left him, as friends and family will attest.

Dick married Peggy Lou (Leonard) Fuller on August 17th, 1974, and they lived together in Westminster, Colorado. Their son, Matthew Richard Fuller, was born August 3, 1981. Dick was an engaged and loving father and husband. He was the Leader of Matthew's Boy Scout Troop and was very involved in Martial Arts with Matthew all through his High School years. Dick and Matthew enjoyed entering competitive shooting competitions and taking additional training courses together. He continued to use the skills he learned in the Marines and worked to become a National Rifle Association Certified Instructor. Richard was also very involved in the Colorado processes for protecting Second Amendment Rights. He worked with the Colorado State Shooting Association, the NRA, and the lawmakers at the State House to help preserve the rights of others.

Richard was also the Vice President of The Scott Brookins Ministries. He was a steadfast supporter of Scott's ministry and was especially proud of the work being done in Uganda at the Voices of Love Primary School.
Richard spent a lot of time raising and training his dogs for Obedience Shows. He had Golden Retrievers and Rottweilers, he loved his dogs and often recalled fond memories for all of their personalities. He was also adopted by his sons' cat Lilly, who was "only ok because he acted like one of the dogs."

Richard was an extraordinary Grandfather to Matthew's children Isabella (8) and Ronan (7). He was very involved in his grandchildren's day to day lives; regularly picking them up from school and taking them for walks along the path by his home or playing in the backyard.
Richard worked at Kaiser Permanente in the IT department for 31 years until he retired in September 2008. In 2009, he started attending and serving at the Flatirons Community Church. He was steadfast in his determination for the safety of everyone who attended the many services each weekend and was passionate about affecting the most positive change in people.

Richard is survived by his wife Peggy, his son Matthew, his daughter-in-law Jenni, two grandchildren - Isabella (Izzy) and Ronan, and his brother Roy.

Donate to Scott Brookins Ministries and The Voices of Love Primary School in Uganda in memory of Richard.