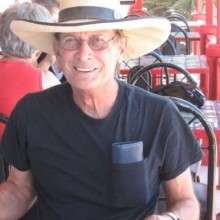 Paul Rodney Nelson passed away peacefully in his Tonopah, AZ home on January 6, 2019.  He was born in Ainsworth, NE on June 23, 1947, to Everett and Shirley (Gibson) Nelson of Springview, NE.

Paul was a ferrier by trade and did this for most of his adult life.  He was also an over the road truck driver, a successful salesperson and most recently retired from Palo Verde Nuclear Generating Station in Arizona.

He was a wonderful cook.  Whether it was baking a pie in the kitchen or smoking a brisket in the backyard, he could run circles around the best-trained chefs.  He won many chili cook-offs over the years.  His recipes will be forever cherished by his daughters.

Paul loved to compete.  Early on, he raised and showed his beloved Great Dane, Duke and most recently advanced his hobby to raising and showing his miniature horses. He was so proud of them.

He inherited his humor from his father.  Some would call him ornery, but also admit that he was very funny.  He was an excellent storyteller and could easily elicit a smile. He had no trouble making friends and had many all over the country. This humor will be missed most.

Paul was preceded in death by both of his parents, Everett and Shirley (Gibson) Nelson; his brother, Ceile Nelson; his uncle and aunt, Norman and Marilyn (Jensen) Nelson; and his wife, Margaret (Hering) Nelson.

Memorial and interment will be at Mount Hope Cemetery in Springview, NE this Spring.  In lieu of flowers, memorials have been suggested to the family for future designation.