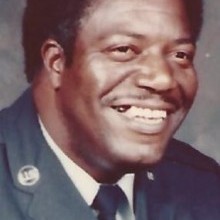 A funeral service will be held at 11 a.m. on Thursday at St. Mary's A.M.E. Zion Church in Laurel Hill, the Rev. Benjamin Jackson officiating. Burial with full military honors will follow at Hillside Cemetery.

He was born on Sept. 17, 1939 in Laurel Hill. He was preceded in death by his parents Ruth and Wilbert Ford, his sister Patricia, and his brothers Bill and Eugene Ford.

Nathan met the love of his life, Nancy, in Gibson and they were married on April 14, 1960. Nathan was honorably discharged from the U.S. Air Force in 1989 after 31 years of service. He also served during the war in Vietnam. Nathan was stationed at various duty assignments throughout the United States and overseas.

He held many positions of high responsibility while in the Air Force, culminating as chief of fuel maintenance at Dyess Air Force Base in Texas.

He attended several professional military education training, to include graduating from the Senior NCO Academy. After retiring from the Air Force, Nathan joined Four-County Community Services in 1990 and retired in 2011.

Nathan would help any veteran, widow, or children of veterans, regardless of their location. He was a member of the Masonic Lodge, the American Legion, and the Scotland County Military Retiree Association.

Nathan said "My country and my community have been good to me and my family, and I try to give something back to both." He was a man of faith, service, duty, honor, and love of his family and country.

Visitation will be from 6-7 p.m. on Wednesday at McPhatter Funeral Home in Laurel Hill.