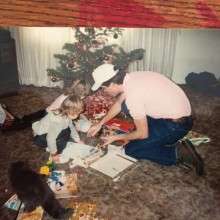 Monty without pain, sadly was abruptly taken from all of us who knew and loved him on February 15, 2018.

Monty was born in at Eden hospital in Fremont, California.

While growing up in the Bay Area he frequented the 49ers, Raiders and the games.

Monty would often tell the story of when  Rickey Henderson while walking to the dugout tossed the baseball he just caught for the 3rd out of the inning into the stands where Monty and many other boys were sitting, immediately there was a dogpile for the ball, Monty said he couldn’t breathe at the bottom of the pile, though he held on too that ball like his life was depending on it, Eventually Monty surfaced with his trophy. shortly after the game was over Henderson about to board the bus to leave the stadium heard Monty yelling, Monty yelled with the ball raised high in his hand “I have your ball Rickey will you sign it for me” Rickey Henderson turned around and signed the ball. Monty proudly kept that ball with him for many years.

Monty's first real job was working for his beloved father and best friend, Richard M. Davis. Richard was a master carpenter in the Oakland Union, Richard decided to put his son next to him building houses. Monty once said the Kid always told me “if you don’t have something in your hand all of the time your on the job site, you aren’t working." Monty said if he even went to the bathroom he would grab a 2x4, put it on his shoulder so everyone knew he was always working. If working meant moving a 2x4 on his way to the bathroom then that’s what he would do.

Monty moved to Missoula soon after November 12th, 1982 when his sister Pamela Davis was in a horrific car accident, the accident left her paralyzed from the neck down. This accident Pamela was involved in created a position for her in life which ended up bringing awareness to the risks of drinking and driving. Sadly on June 28, 2012 Monty’s sister Pamela passed away due to complications that often come from being a quadupaligic for as many years Pamela had survived. it should be noted that Monty often said “my sister faught death off much longer then the doctors ever thought she could.”

Monty also enrolled at Trapper Creek Job Corps, located in Darby, Montana.      Monty quickly became the Trapper Creek ping pong champ, very rarely ever to be beaten, this was due to his famous spin shot.

For Monty’s work trade he chose to become a painter. Being a painter served him well even in his later years. Monty while at Job Corp quickly joined the forest crew at trapper creek so he could help fight the Montana fires. Monty always liked to live on the more dangerous side of life, Instead of being a follower he insisted on being a leader in almost everything he decided he would dedicate himself too doing. There was never a time Monty allowed a person to be picked on by someone bigger, he was well known for a man that always stood for the weaker person, many called Monty their protector.

Before Monty left Trapper Creek he met his first love and future wife, Janey. Monty and Janey had two children together their first child was a daughter they named Ashley Marie Davis. their second child was a boy they named Justin Dale Ray Davis. Soon after Job Corps, Janey and Monty found themselves in North Dakota where Janey and her family grew up. While in North Dakota Janey’s brother Jerry Sather got Monty a job with him at the Grand Forks City Sanitation Department they were part of the crew on the garbage truck keeping the town clean.

Monty and Janey ultimately decided to separate. Monty went to Alaska. While in Alaska Monty joined a fishing boat, eventually the fishing contract was met and with a handful of hard earned cash Monty returned to see his children Ashley and Justin. Eventually, Monty ended up in Reno, Nevada once again being a leader this time as a Master detailer in a detail shop, where he eventually got his brother Rodney a position working next to him.

Monty eventually met Jean and Jean gave Monty his third child a boy. Jean and Monty named their son, Corey Davis, corey ended up being an incredible baseball player but choose instead to be a full-time father to his first child which made Monty very proud.

After Monty and Jean were no longer together Monty met his second wife, Marlene. Monty traveled all around the United States for many years. Monty loved life on the road. Monty and Marlene eventually separated.

After separating from Marlene, Monty moved back to Missoula. Soon after being back Monty met Lauri and started a relationship with her That lasted off and on for more then 11 years. Lauri blessed Monty with his first canine partner, “Pokey” who would go everywhere with him. Eventually, Monty and Lauri separated for a time. During this time Monty met another major love of his life, Her name was Tina. Tina also has a daughter who became his adapted fourth child and second daughter, Ryan. While with Tina, Monty found another best friend she was a little blonde Pomeranian named TINK. Which he never allowed out of his sight. Tink is now back in Ryan’s arms after Monty’s passing, right where Monty would have choose for Tink to go.

Monty made some more of the best memories he ever had in his life with his Ryan and Tina. Monty would often tell his son, Justin, how happy and proud he was to have Tina and Ryan in his life, they both meant the world to him.

As life progressed Tina and Monty separated, Tina and Ryan, moved to Georgia. Monty could never lose contact totally with Ryan, who owned the rights to his heart, and he freely gave her all of it without hesitation. Ryan and Monty were separated by distance but still talked on the phone when possible.

Soon after Tina and Ryan went to Georgia, Monty somehow bumped into Lauri near the area of the California Street bridge in Missoula, Monty and Lauri were hit with that old feeling They had once shared, and they once again fell in love. Lauri and Monty began where they left off.

There was a man that meant more to Monty then anyone could ever imagine, this man was his father, Richard M Davis, who very sadly developed Alzheimer’s, Due to old age and lung problems Richard passed away on June 21, 2017, at he age of 82. Richard's passing had to be the most bitter pill life had ever forced Monty to swallow, Monty and Richard were inseparable with one another, if Monty was in another state he would call every chance he could get. On Sunday’s when the San Francisco 49ers were playing Monty would call Richard's phone, He’d let it ring 2 times so Richard would know he was celebrating the great play. The reason Richard didn’t answer is because back in the 90s long distance cost a lot and all that was needed was those 2 rings of the phone for them to feel like they were together like old times, back in the Bay Area at Candlestick watching the 49ers play, as they would high five after every great play. When Richard passed away Monty lost his best friend and father, he respected and loved Richard to a level that can’t be described in words. Monty would rarely show his emotions, that’s until he would speak about his fathers passing, while speaking about Richard, Monty wouldn't hold back emotion. Monty had a broken heart that only now Heavenly Father has fixed by uniting Monty and Richard together once again in Heaven where every time we see the 49ers, A’s or the Raiders playing we can know one thing for sure, Monty and Richard have lifetime season tickets they are together at the game and there will always be a feeling in the stadium like there was back in the Bay Area when life just seemed much more simple.